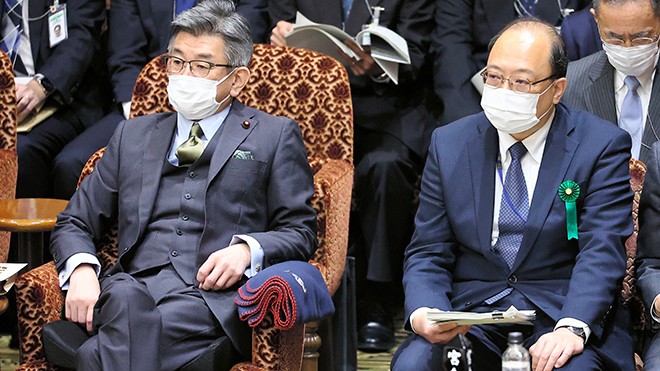 A high-ranking bureaucrat is being removed from his post on suspicions he broke civil service ethics rules when he was out wining and dining with industry stakeholders that his ministry regulates.

Yasuhiko Taniwaki, vice minister of policy coordination at the telecommunications ministry, is being shuffled out of his role and into a temporary position with the minister’s secretariat over suspicions he violated the National Public Service Ethics Law.

The Ministry of Internal Affairs and Communications made the announcement on March 8.

The telecommunications minister apologized during a special news conference.

“It is truly regrettable that the vice minister for policy coordination at the ministry damaged the credibility for public affairs significantly,” said Ryota Takeda. “I would like to apologize for it, sincerely, once again.”

The ministry also revealed details from its interim report into the matter. It found that Taniwaki and Eiji Makiguchi, the director-general of the ministry’s Global Strategy Bureau, were both treated to expensive meals by telecommunications giant Nippon Telegraph and Telephone Corp. group at least four times over the course of two years.

According to the ministry, NTT President Jun Sawada and other top brass from NTT group companies entertained the two senior bureaucrats four times from September 2018 to July 2020.

The cost of the meals ranged from about 17,000 yen to 60,000 yen per person. Taniwaki dined with company officials three times, and only once paid 5,000 yen out of his own pocket. Makiguchi dined on one occasion and paid 10,000 yen of his own money.

Receiving benefits in the form of meals and drinks constitutes a violation of the National Public Service Ethics Code if those paying for the meals are industry stakeholders, for example, operators that receive government approvals or subsidies.

Government officials are allowed to dine and drink with stakeholders so long as the participants split the bill and notify the respective ministries and agencies in advance if their dinner tab is expected to cost more than 10,000 yen.

According to the ministry, the two senior bureaucrats did not notify the ministry. When they were questioned about it, the policy makers said that they recognized they were dining with stakeholders but thought they had split the bill appropriately.

In June last year, Makiguchi and Makiko Yamada, a former Cabinet public relations secretary who was vice minister for policy coordination at the ministry at the time, were treated to meals. But the ministry did not investigate Yamada because she had resigned from her post at the ministry.

(This article was written by Ryo Toyoka and Ryo Inoue.)