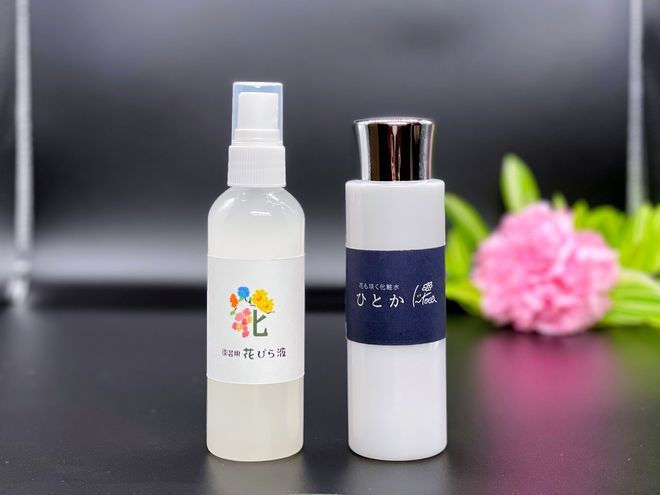 Bottles for "Hanabira-eki," left, a gardening product, and the "Hitoca" beauty lotion were also designed by the three medical students who took inspiration from commercial products. (Provided by Asahi Ota)

NAHA--Asahi Ota became fascinated by the bright, colorful hibiscus flowers blooming in all corners of his neighborhood when he moved to Japan’s southernmost prefecture of Okinawa.

But soon after the Aichi Prefecture native picked them and brought them home, they would wither away.

So, Ota, 20, decided to find a way to make them last longer. But the second-year medical student at the University of the Ryukyus Faculty of Medicine was swamped with schoolwork.

He never would have imagined that his idea for a side project to preserve flowers for longer, which he had struggled to find any time for, would soon launch him into the skincare business.

When the COVID-19 pandemic came along, it forced classes to switch to online, and suddenly Ota had a lot more time at home.

He recruited the help of some of his classmates for the project. Kentaro Okamura, 22, and Okamura's younger brother Rentaro, 20, got together with him to conduct a series of experiments to find a way to make cut flowers last longer at home.

They initially took some stabs in the dark, putting blooms into different liquid solutions, such as watered-down soy sauce and sugar--but to no avail.

Seeing no point in experimenting blindly, they decided to study the structure of flowers before going back to the drawing board.

The trio learned of the importance of aquaporins, a type of protein found within the membrane of cells. Because they serve as a channel for human cells and the cells of many other creatures to incorporate moisture, the students thought the protein held the key to moisture retention.

When they removed impurities from tap water and added plant extract, they found that made it easier for aquaporins to incorporate moisture.

The lotion, which took about five months to complete, helped cut flowers last about twice longer than water.

The three felt sure it would sell.

They put labels on spray bottles procured from a 100-yen (91 cents) shop so they could offer the lotion as a commercial product.

Even though the product was ready for release, Ota and the Okamuras had no sales channels until Hiroki Nagano, 46, offered to help.

Nagano, who is involved in managing the popular massage parlor chain Goku-no Kimochi, had been looking for prospective entrepreneurs through his new company in Osaka, called Goku-no Kimochi The Lab. He said he founded it to help young people make their dreams come true.

Nagano met Ota at a social gathering he organized for students in Okinawa Prefecture, and decided to lend a helping hand.

In October last year, the lotion was put up for sale online as a gardening supply product, called Hanabira-eki. It is sold for 3,100 yen, excluding tax, per 100-milliliter bottle.

The product sold out immediately.

Then, Ota received a surprising call from a buyer at a major department store, who asked him whether the lotion could be sold as a beauty product.

He considered it and thought the lotion should also work well at moisturizing skin, given that flower petals are much thinner and more fragile than human skin. Sure enough, it leaves skin fresh as a daisy.

He soon set to work developing a cosmetic version of the product.
Ota was picky about the bottle designs and packaging art, but a cosmetics manufacturer in Tochigi Prefecture offered to produce the skincare lotion and whipped up the right design.

The resulting "Hitoca" skin lotion is available nationwide for 4,300 yen before tax per 100-milliliter bottle. And it has become a hot-selling item.

The surprise business venture from a home gardening project that grew into a sudden marketing success have given Ota a lot to consider as he looks back on the project and into the future.

"I don't want to give up on possibilities as an adult, but I want to keep chasing dreams like a child," he said.