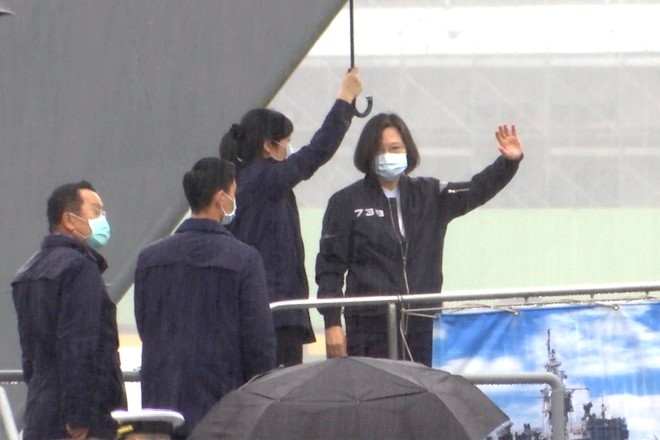 In this image from a video, Taiwanese President Tsai Ing-wen, right, boards a guided-missile frigate in the northern port of Keelung, Taiwan, on March 8, 2021. (AP Photo)

KEELUNG, Taiwan--Taiwanese President Tsai Ing-wen visited a naval base on Monday to thank sailors and marines for their dedication to protecting the island amid renewed threats from China, vowing not to allow the loss of “any single inch” of territory.

In remarks during her visit to the 131st Flotilla in the northern port of Keelung, Tsai said the bravery of servicemembers “demonstrated the determination of Taiwan’s national armed forces to defend the sovereignty of our country.”

“We can’t yield any single inch of our land,” Tsai said.

Tsai’s tough talk comes amid stepped-up Chinese military exercises and near-daily incursions by Chinese military aircraft into airspace close to Taiwan. China claims the island, which broke away amid civil war in 1949, as its own territory and threatens to use its massive military to bring it under Beijing’s control.

China accuses Tsai and other members of her pro-independence Democratic Progressive Party administration of undermining security in the Taiwan Strait. Beijing cut off contacts over her refusal to recognize the island as a part of China and has sought to pressure her through diplomatic isolation and economic measures.

Separately, Wu Qian, a spokesperson for China’s Defense Ministry, reiterated that China would not “renounce the use of force and reserve the right to take whatever measures are necessary.”

Tsai has made boosting Taiwan’s indigenous defense capacity a central pillar of her defense policy, while also buying billions of dollars in weapons from the U.S., including F-16 fighter jets, armed drones, rocket systems and missiles capable of hitting both ships and land targets.