Sugita defeats Mori in online vote for most sexist comment 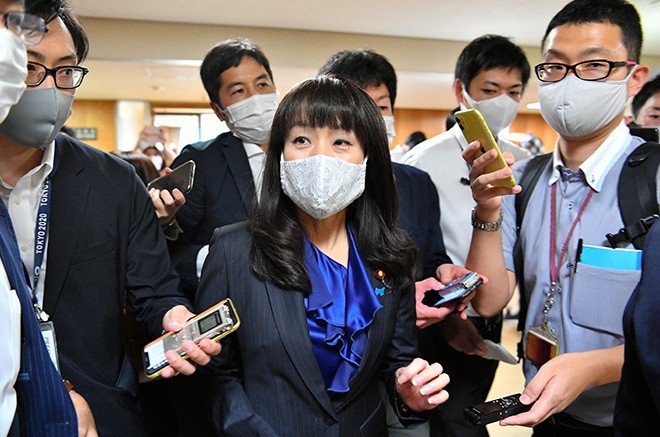 Ruling party lawmaker Mio Sugita was voted the political figure who made the most sexist remark over the past year, defeating former Tokyo Olympic chief Yoshiro Mori.

Sugita, a 53-year-old Lower House member, is known for making offensive comments. But the one that won her the most votes in the online contest came in September 2020, when she said that “women can lie as much as they want” about sexual violence.

That remark was made at a closed-door meeting of Liberal Democratic Party lawmakers. After the comment was leaked to the media, Sugita came under heavy criticism.

One online comment said, “It is terribly heartless to say such a thing to (women) who have gone through so much to finally report they were victims of sex crimes.”

The online vote was organized by a group of university professors and others who condemn gender discrimination. It was held to mark International Women’s Day.

It was the fourth online vote organized by the group, known as NOASEPS (NO to all sexist public speeches).

The group nominated eight misogynistic and homophobic remarks. Voters could cast up to two votes each from Feb. 26 to March 5.

The runner-up was Mori’s February remark that women talk too much at board meetings because they are competitive. It received 1,216 votes, or 20.2 percent of the total.

Mori, 83, a former LDP prime minister, resigned as president of the Tokyo Olympic and Paralympic organizing committee after his remark caused an international uproar.

“There are too many problematic public speeches,” said Masumi Minagawa, an associate professor at Chuo Gakuin University who is a member of the group. “But finally this year, something was done, and a person who made a troubling remark took responsibility and resigned. It was a remarkable incident that proves strong criticism can bring about social change.”

Sugita, however, remains in the Diet and the LDP despite public protests calling for her resignation. She placed second to former Prime Minister Taro Aso in the 2019 vote for saying in an essay that LGBT people are “unproductive.”

The other nominations in the latest vote included comments offensive to the LGBT community that were uttered by local assemblymen.