Fukushima gains ground in plan to cover all power with renewables 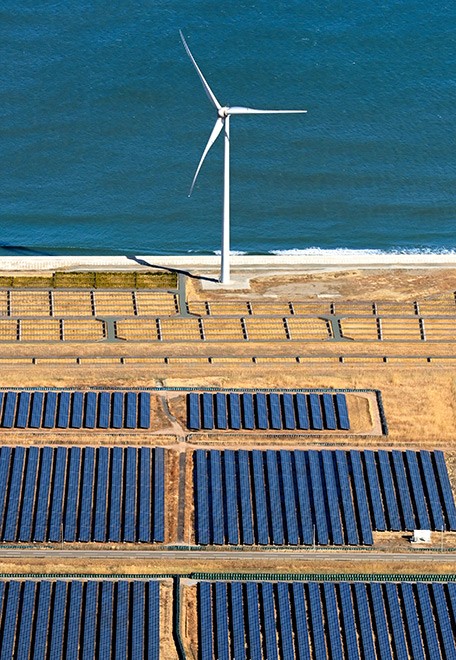 FUKUSHIMA--This prefecture, home to the stricken Fukushima No. 1 nuclear power plant, is making big headway on its goal to achieve 100 percent renewable energy by 2040.

Fukushima Prefecture ranked top in solar power generation capability last April among all prefectures and was listed eighth in wind power generation, according to the power research statistics by the ministry of trade and industry.

How the disaster-hit area's efforts to go green pan out may help predict the prospect of Japan’s renewable energy policies.

Once engulfed by the huge tsunami on March 11, 2011, the coastline of the prefecture's Minami-Soma is now dotted with windmills and solar power panels.

In 2012, a year after the disaster at the Fukushima No. 1 nuclear plant, Yuhei Sato, then Fukushima governor, declared the prefecture would “aim to build a society that is able to continue to develop without relying on energy from nuclear power by promoting renewable energies."

He then set a target to generate all the amount of energy consumed in the prefecture with renewable energy by 2040.

A system has been started across the nation to have major electric power companies buy the electricity generated by renewable power at a fixed rate, while a subsidized program was created for Fukushima Prefecture.

Fukushima's various renewable energy sources, including water power generation, accounted for 35 percent of its total energy production as of fiscal 2019.

The prefecture is also trying to increase the ratio further by promoting wind power.

The Abukuma Highlands in the prefecture's east experience strong winds, so companies building windmills in the area have received major financial support to utilize them and connect them to existing power lines.

There has been a rush to build windmills. Approximately 800,000 to 1.6 million kilowatts of power will be generated by them, according to the estimation by The Asahi Shimbun based on related-documents.

If one windmill can produce 2,700 kilowatts, it means that 300 to 600 windmills are to be built in the future.

About 20 companies in and outside the prefecture are planning to soon establish a general incorporated association to receive orders for the maintenance of windmills.

Makoto Watanabe, a main promoter of the project, said, “We would like to receive orders of 3 billion yen ($27.5 million) to 5 billion yen per year.”

Some of the companies handling the project were previously involved with nuclear power generation.