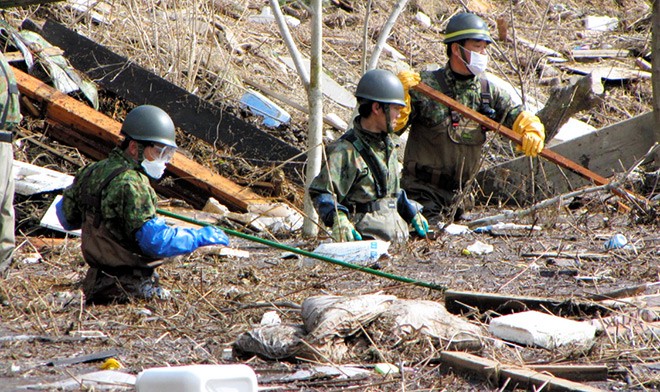 Extensive periods working in the aftermath of major natural disasters heightens the risk of post-traumatic stress disorder (PTSD), according to a long-term study of Self-Defense Forces members.

The finding has ramifications for those working for other companies and organizations and who spend inordinate amounts of time helping disaster victims.

“Japan is expected to suffer from major natural disasters in the future and other occupations have been called on to provide disaster relief assistance,” said Masanori Nagamine, an industrial public health and psychiatry professor at the National Defense Medical College, who led the study.

“It will be important from a labor management perspective in dealing with mental health issues not only during the dispatch to disaster areas, but also after the individuals return to their place of work.”

The research team followed up over a six-year period on about 56,000 Ground Self-Defense Force members who were dispatched to the three most heavily damaged prefectures of Iwate, Miyagi and Fukushima in northern Japan.

The team found that 6.75 percent of the GSDF members suffered from PTSD.

The researchers also examined the relationship between working conditions and PTSD.

One finding was that the risk of PTSD increased by 75 percent for those who were dispatched for more than three months in comparison to those who only spent up to a month in the disaster-stricken areas.

The risk of PTSD also increased depending on the type of relief assistance engaged in. The risk increased by 18 to 19 percent for those who helped recover bodies swept away by the tsunami or faced radiation exposure in working in evacuation areas near the crippled Fukushima No. 1 nuclear power plant in comparison to those who were not involved in such work.