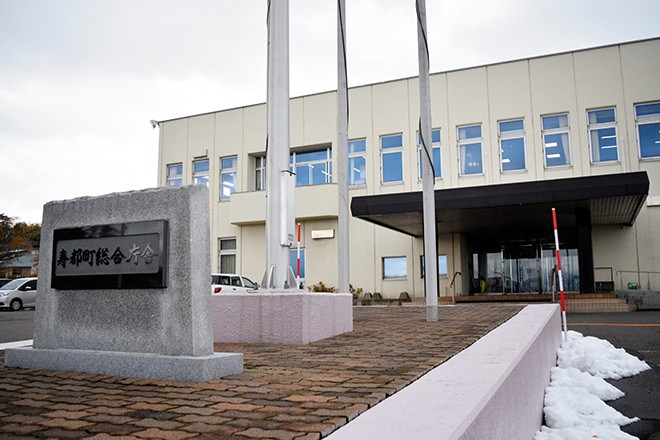 The town hall in Suttsu, Hokkaido, where a literature survey has started on whether the municipality is geologically sound to host a final storage facility for high-level radioactive waste (Asahi Shimbun file photo)

SUTTSU, Hokkaido--In an abrupt turn of events, this coastal fishing town decided to hold an early referendum on whether to host a final storage facility for highly radioactive waste from nuclear plants across Japan.

The town assembly on March 8 adopted an ordinance to hold a vote before Suttsu enters the second stage of the central government’s 20-year selection process for the storage site.

The referendum will likely be held at the end of next year at the earliest in the town of around 3,000 people in western Hokkaido.

The three-stage selection process is set under the law governing the final disposal of radioactive waste.

Since November, the first stage of the selection process--a literature survey--has been under way in the town. The two-year survey involves studies of geological and mineral resource maps of Suttsu and other documents to ensure the storage site would be safe from earthquakes, volcanic eruptions and other geological activities.

Any municipality that applies to host the disposal site can receive up to 2 billion yen ($18.5 million) in government grants during the first stage.

Opponents of the envisioned storage facility wanted a referendum held in the town before the literature survey started. But their proposal was turned down at a town assembly meeting in November.

The push to host the nuclear waste storage facility has been led by Haruo Kataoka, mayor of the financially struggling town.

In a rather surprising move, Kataoka submitted a proposed ordinance to a town assembly session earlier this month, calling for a referendum to be held before the third and final stage of the selection process.

That way, the town could still enter the second stage and be eligible for up to 7 billion yen in grants. The second stage would be a four-year preliminary investigation, including taking boring samples in the town.

But at a March 3 session, Masanao Konishi, chairman of the nine-member assembly, proposed a revised ordinance to hold two referendums--one before the second stage and another before the final stage.

His proposed ordinance was adopted at the assembly session on March 8.

Kataoka, who is serving his fifth term, is expected to run in the mayoral election in November to seek a new four-year term. He has come under fire from critics within the town and in nearby municipalities who say he is pushing the disposal plan without listening to any opposing views.

Assembly members who are against the disposal facility said the mayor abruptly proposed a referendum to deflect such criticism.

The 14-year final stage involves a detailed investigation. The amount of grants has yet to be determined for this phase.

Even half a century after nuclear power plants began generating electricity in Japan, the country does not have a facility to permanently store the waste produced at the plants.

The central government plans to bury the high-level radioactive waste at least 300 meters below the ground surface and keep it there for nearly 100,000 years.

For years, the economy ministry could not find any municipality willing to host such a storage site.

In October last year, Settsu and Kamoenai village, also in western Hokkaido, applied for the task.