Bill to curb use of disposable plastics gets nod from Cabinet 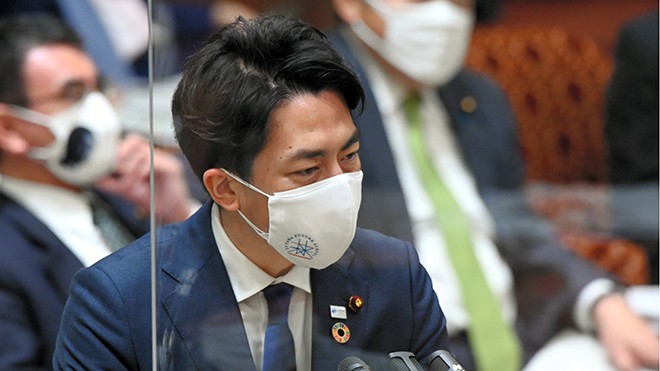 Environment Minister Shinjiro Koizumi answers questions from Masako Mori, a lawmaker of the Liberal Democratic Party, at an Upper House Budget Committee session in the Diet on March 3. (Kotaro Ebara)

The government is proceeding with its plan to rein in the use of single-use plastics and curb the amount of plastic waste the country produces.

The Cabinet approved the plastic-material recycling promotion bill at a meeting on March 9.

The bill covers many plastic products used in people’s daily lives, such as plastic forks and straws from convenience stores and other shops.

The government will ask businesses to charge fees for single-use plastic products or replace them with alternatives.

Environment Minister Shinjiro Koizumi pointed to the government’s labeling system for approving foods for specific health uses as an example of the type of model he wants to emulate.

“I would like to make something similar to help consumers better distinguish products,” he said.

The government plans to pass the bill in the current Diet session and implement it as early as spring next year.

The bill aims to reduce the overall amount of plastic usage and help prevent the garbage from ending up in the ocean.

The government does not, however, intend to establish systems for each product, while the recycling law for cars and home electrical appliances did so.

The bill will focus on the materials used and will target a wide array of single-use plastic products, such as spoons, straws and hangers. Future ministerial ordinances will tackle the specifics.

Businesses would have to meet at least one of several conditions set out under the new program. They must either ask their consumers whether they need the plastic products, or they must charge fees for those products. Or, instead, operators can replace them with alternative materials, such as ones made of wood.

The bill will cover a range of businesses. For example, convenience stores that operate nationwide will fall under its net.

The government will also ask businesses to reduce single-use plastic products from their manufacturing processes, based on guidelines for reducing and replacing plastics.