Revised policy has no plan for water buildup at Fukushima plant 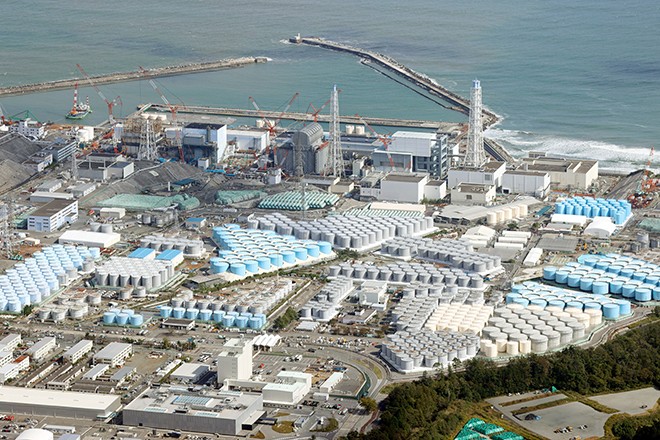 The government continues to defer a decision on dealing with more than 1 million tons of contaminated water stored at the Fukushima No. 1 nuclear power plant, an issue that has drawn international attention.

The Cabinet on March 9 approved the government’s revised basic policy for reconstruction of the Tohoku region for fiscal 2021, which begins in April, and beyond.

But the policy only stated that a conclusion would be made “at an appropriate time” regarding the accumulating water at the stricken nuclear plant.

The government has floated the idea of discharging treated water into the Pacific Ocean next to the nuclear complex. But it has been forced to delay a decision on the plan.

The treatment process cannot remove all radioactive substances from the water. Fishermen have objected to the release of the water, fearing unfounded rumors will circulate about the safety of their catches and other marine products. South Korea has also voiced objections to discharging the water from the nuclear plant.

Negotiations between government officials and local fishermen and the national federation of fishermen’s groups have bogged down over the water issue.

The revisions of the basic policy for reconstruction were the first since December 2019.

Under the revised policy, the government designated five years from fiscal 2021 as the second phase of reconstruction for the Tohoku region, which was hammered by the magnitude-9.0 Great East Japan Earthquake and tsunami on March 11, 2011.

The tsunami knocked out power at the Fukushima No. 1 nuclear power plant, leading to the triple meltdown.

In the revised basic policy, the government pledged to continue spearheading rebuilding efforts in Fukushima Prefecture, including relocating people to areas evacuated by residents after the nuclear disaster.

The policy also described the disposal of the treated contaminated water as a “challenge that cannot be pushed back,” and the government will take steps to address safety concerns.

But it did not specify when the government will make a decision on what to do.

One big problem in the decommissioning process is that groundwater has flowed steadily into buildings housing the melted-down reactors. Workers have stored this contaminated water, as well as the water used to cool the melted nuclear fuel, in tanks at the site after treating it.

Tokyo Electric Power Co., operator of the plant, said in 2019 that the plant’s capacity to store such water is 1.37 million tons.

In January, the company and the government said all of the tanks at the site are expected to be full in autumn 2022 at the earliest.

A panel with the industry ministry, which oversees the nuclear industry, recommended in February 2020 the release of the water into the ocean after diluting it to meet the government’s discharge standards.

After the panel’s proposal, Okuma and Futaba, two towns that co-host the nuclear plant, called on the government make an early decision on the disposal policy.

Prime Minister Yoshihide Suga in September promised to do so.

(This article was written by Noriyoshi Ohtsuki, senior staff writer, and Yo Noguchi.)