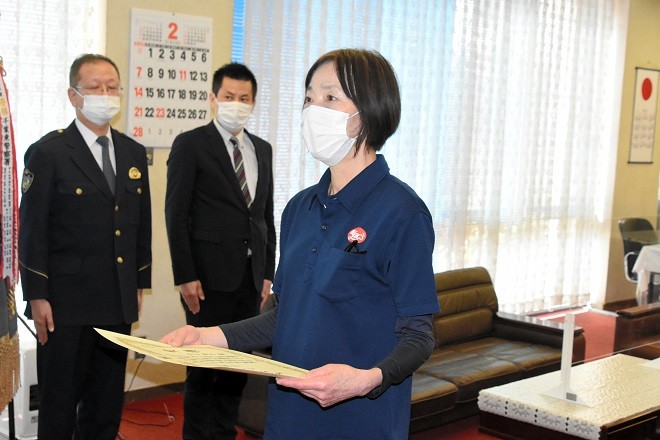 CHIBA--When she saw a man thrusting a knife at a woman under him, Noriko Yamaguchi rushed to kick him away.

The quick action taken by the 63-year-old caregiver, who lives in Wakaba Ward, ultimately helped police arrest the attacker and save the woman, officers said.

“I hesitated for an instant but thought I had to save her life,” said Yamaguchi, explaining the tense situation and why she felt the need to intervene instead of waiting for police. “I could not keep my hands from shaking until police arrived to pick up the man.”

The attack unfolded on the evening of Dec. 4 last year.

According to Chiba-Higashi Police Station, a 76-year-old unemployed man living close by tried to kill an acquaintance of his by stabbing her in the chest with a kitchen knife. The attack took place on the property of an apartment complex in the ward’s Chishirodai-Higashi district.

Yamaguchi witnessed the assault while she was walking to a post office. She saw that the man straddling the victim was about to stab her with the knife. Yamaguchi noticed blood around the victim’s hand. She shouted, “Stop it!” and kicked the man in his side.

Another bystander quickly joined the fray, allowing them to get the attacker away from the woman. Police who received the emergency call turned up several minutes later to apprehend the attacker.

In the end, the man had stabbed the victim three times, in the chest and elsewhere. But she was rushed to the hospital and her injuries were not life-threatening.

The woman has already been discharged from the medical center, according to the police station.

The Chiba prefectural public safety commission gave a certificate of appreciation to Yamaguchi for her heroism.

“She saved the life of the victim through such courageous conduct that our detectives were astonished at her bravery,” said Hiroshi Nakamura, a former head of the police station, in praising Yamaguchi.