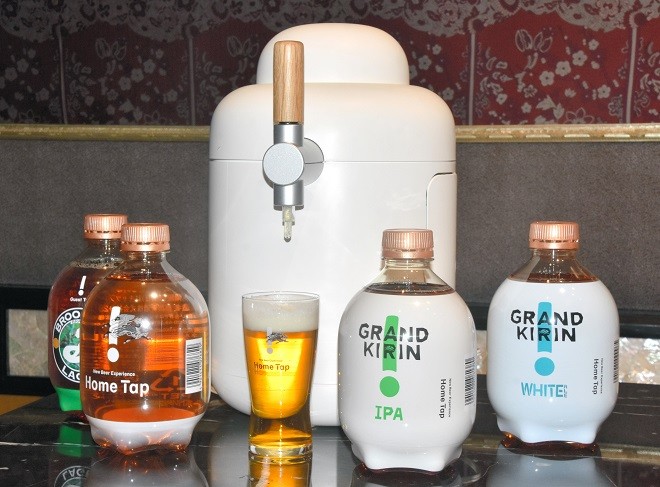 Major brewers are catering to new drinking trends during the pandemic by offering a dream appliance for imbibers: home beer taps.

Under the business plan, consumers can lease draft beer dispensers and receive regular deliveries of the beverage.

Drinking at home has increased as restaurants and bars have closed earlier and authorities are advising the public against holding parties to prevent the spread of the novel coronavirus.

“The beer market has gradually been shrinking but the environment has begun to change due to the novel coronavirus pandemic and other factors,” Takayuki Fuse, president of Kirin Brewery Co., said at a news conference in Tokyo on March 8. “By taking on a new challenge, we will render the whole market much more appealing.”

That day, Kirin announced it will start its Home Tap program on a full scale. Customers who receive a specialized faucet free of charge can have draught beer in 1-liter containers delivered twice a month to their homes.

Consumers can choose from among four or so kinds of craft and other beer products made available each month. The monthly fee starts from 8,250 yen ($75.80) after tax.

The product keeps the contents cold, so the beer can be served up to 48 hours after the container is opened and fitted with the dispenser.

Although Kirin has run the rental system on a very limited scale starting in 2017, the brewer expects the tap machine to greatly expand the business.

It plans to raise the number of the service’s registered users from 30,000 as of the end of February this year to 100,000 by year-end.

Users can also take the beer faucet to barbecues and other outdoor activities. Its Extra Cold feature can chill beer to subzero temperatures while keeping it drinkable.

Details on the new system will be released in April.

Suntory Beer Ltd. plans to market a small device that can be mounted on beer cans to generate far finer bubbles.

The unit measures 11 centimeters long and can produce smooth beer heads with its fast oscillation function. The machine will not require cleaning or other troublesome maintenance duties, according to Suntory representatives.

The device was initially distributed only as part of a promotional campaign, but it will be made commercially available in response to growing demand for alcoholic products enjoyed at home.

The 980-yen foam generator, including tax, will be put on sale on a Suntory website and elsewhere starting in late April.