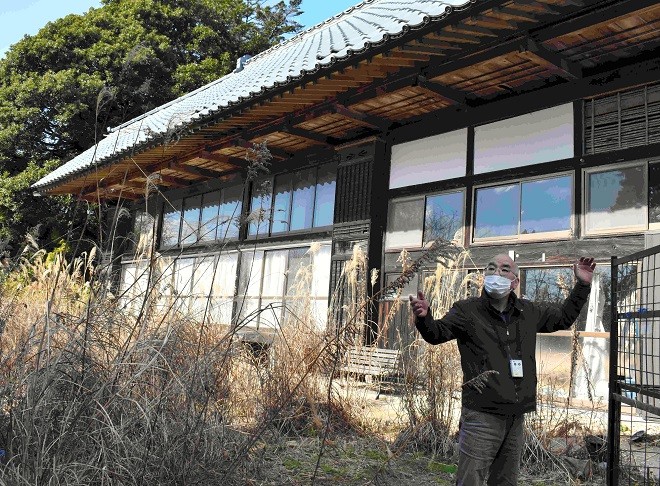 Norikatsu Nakazato, an evacuee of the 2011 nuclear disaster, stands in his garden overgrown with weeds at his house in Futaba, Fukushima Prefecture, during his temporary visit on Feb. 19. (Hiroshi Fukatsu)

FUTABA, Fukushima Prefecture--When Norikatsu Nakazato made his way inside his dilapidated house here in February, the floor squeaked and dust rose in the air as he walked about.

The house was strewn with animal excrement all around that added to his misery.

“It is excruciating to see our house decaying like this,” said Nakazato, 63. “But I need to come here to confirm anew that I have a house and land to protect. Keeping that in mind helped me maintain my sanity over the past years.”

It was the first time in a year that Nakazato had visited his home, which was built some 150 years ago.

He and his family hurriedly vacated their residence following the crisis at the Fukushima No. 1 nuclear power plant in the town on March 11, 2011, set in motion by the Great East Japan Earthquake and tsunami.

Nearly 10 years later, as of January, about 36,000 people, including Nakazato and his family, remain displaced, with about 80 percent of them living outside the prefecture, according to Fukushima prefectural officials.

Akira Imai, chief researcher with the Japan Research Institute for Local Government, a public interest entity, said the primary reason evacuees chose not to return to their hometowns is that they believe the nuclear disaster has yet to be contained.

A survey conducted in January by The Asahi Shimbun and Imai showed that 95 percent of respondents still feel the plant poses a danger.

However, even if their sense of alarm hinders their return, most retain their emotional ties to their hometowns.

The survey found that 80 percent of evacuees maintain their residence registry in their hometowns, like Nakazato, even though they have been living elsewhere since 2011.

“That must be an expression of their resentment against authorities for the fact that they had to be displaced because of the nuclear disaster,” Imai said. “A system should be created to encourage them to join activities both in their hometowns as well as in their host communities. That way, they can avoid feeling isolated and speed up reconstruction efforts.”

Nakazato must obtain a special permit to return to Futaba, which is still covered by the central government’s evacuation order. The town had a population of about 7,000 before the disaster.

After the nuclear disaster occurred, Nakazato and five other family members fled to Saitama Prefecture at the directive of the Futaba town hall.

But he returned to Fukushima Prefecture on his own four months later to continue working as head of the general affairs department of a shopping center. He rented an apartment in Koriyama, 60 kilometers from his home in Futaba.

Nakazato saw his family only once a month so he focused all his energy on work.

“I did not want to be made a fool of by something I had no control over and regret having given in to that,” Nakazato recalled thinking. “I was excessively motivated not to let myself cave in.”

Like many other evacuees, his family has been torn in weighing if they should eventually return to their hometown as they struggled to adjust and fit into their host community.

But in 2015, they took a decisive step--buying a used house in Saitama Prefecture.

The ban on Futaba is scheduled to be lifted for part of the town in spring 2022 after cleanup efforts are completed there, according to the central government’s plans.

More than 80 percent of the town, however, will continue to fall under the ban, including Nakazato’s community. The central government has not even formulated plans for the decontamination of the rest of Futaba.

“This is like we are running a marathon with no finish line in sight,” Nakazato said. “If you know how many kilometers there are to go, you can keep yourself motivated. But you will only feel drained under the current circumstances.”

Nakazato still lives apart from his family while he continues working at his job in Fukushima Prefecture.

He said he cannot shake off fatigue these days as he ages.

“Even if I can return to my hometown to live, it will be unrealistic to carve out a life at such an old age” without sufficient infrastructure and a community of neighbors that he has known for years, he said.

Still, he is determined to work hard to maintain his ties with the town that he has lived throughout his life.

“This may sound strange, but my determination to remain a resident of Futaba is growing firmer,” he said.

Of the 11 affected municipalities, seven were placed in the “difficult-to-return zone” that prohibits entry as the annual radiation dose is estimated at more than 50 millisieverts there. Futaba and Okuma, which co-host the plant, and Namie, a town in their vicinity, were among these.

As the central government’s programs to clean and reconstruct damaged infrastructure proceeded, the evacuation order has been lifted for nine municipalities, including partial lifting, by spring 2017.

An additional lifting of the evacuation order followed in Okuma and Futaba between 2019 and the spring of 2020.

As a result, 70 percent of the areas initially covered by the evacuation order have been lifted to date.

Of the zone, the central government is preparing the lifting for an area representing 8 percent of the zone between 2022 and the following spring. But no plans have been drawn up for the remaining zone.