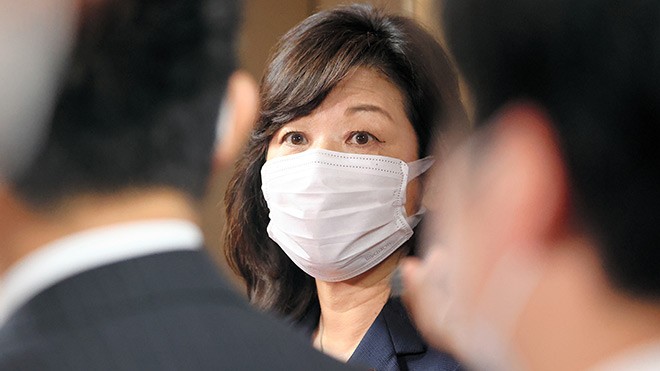 Seiko Noda, acting secretary-general of the ruling Liberal Democratic Party, answers questions from reporters on March 11 about a magazine report on her dinners with officials with Nippon Telegraph and Telephone Corp. when she was telecommunications minister. (Kotaro Ebara)

The wining and dining scandal currently rocking the telecommunications ministry, now centering on one of its key stakeholders, is expanding to include four politicians who were formerly ministers or held senior ministerial posts there.

The weekly magazine Shukan Bunshun reported through its online platform on March 10 that officials from the telecommunications giant Nippon Telegraph and Telephone Corp. hosted dinners for Seiko Noda and Sanae Takaichi on two occasions each when they served as telecommunications minister.

The two other politicians are Manabu Sakai and Minoru Terada, who attended a dinner once each with NTT officials when they served as vice minister, according to the report.

The dinners were held between November 2017 and September 2020. Jun Sawada, president of NTT, attended some dinners.

The ethics code for ministers, vice ministers and parliamentary secretaries--the top posts held by politicians in the country--forbids them from accepting entertainment or gifts from individuals in the sector they regulate because the acts “could arouse suspicion from the public.”

After the Bunshun Online’s report, Takaichi hit back, while acknowledging that she had dinners with NTT officials.

“I responded to the writers of the report by making it clear, in writing, that I was not wined and dined, with receipts of my payment and literature showing the costs of the dinners at the restaurants in question attached,” a statement posted at her website read. “NTT officials brought up no topics whatsoever to ask for favors in connection with the ministry’s oversight.”

Noda, acting secretary-general of the ruling Liberal Democratic Party, said her take of the dinners is that they were "private meetings," not wining and dining, when asked by reporters on March 11.

Sakata, who is deputy chief Cabinet secretary, said he “attended the dinner as Hiromichi Shinohara, chairman of NTT, invited me to introduce his acquaintances,” in response to questions from The Asahi Shimbun.

“The NTT side picked up the tab, and I am not aware of how much it cost,” he said.

Terada also acknowledged that he was treated to the dinner.

“Since I was invited to the dinner, I let them pay,” he said through his office. “I was not asked for any favors.”

As the scandal involving the ministry continues to unfold, the main opposition Constitutional Democratic Party of Japan is vowing to explore the matter in greater detail.

“We are going to pursue the scandal in the Diet,” Shu Watanabe, acting secretary-general of the party, said at a news conference on March 10.