Yosuke Futomi uses underwater drones in his searches for remains and items of people missing since the 2011 earthquake and tsunami. (Shigetaka Kodama) 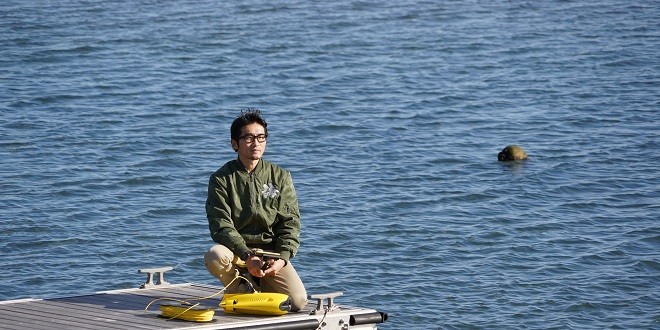 Yosuke Futomi uses an underwater drone in Watari, Miyagi Prefecture, on Feb. 5 to search for remains and items of people missing since the 2011 earthquake and tsunami. (Shigetaka Kodama)

WATARI, Miyagi Prefecture--Haunting memories of the death of his brother have pushed Yosuke Futomi to continue searching the seabed here to help tsunami survivors gain a sense of closure.

Futomi runs a marine sports facility in the town of Watari. But since 2016, he has volunteered to dive into the ocean for clues of those who disappeared in the Great East Japan Earthquake and tsunami on March 11, 2011.

Around 2,500 people remain unaccounted for, mainly in the Tohoku region, since the disaster, and the chances of finding their remains decrease every day.

Futomi scours the seabed for remains and items of those who were carried away by the tsunami.

He began receiving more inquires around last summer from those who learned about his activities through word of mouth.

I was a junior high school student in Tokyo at the time of the disaster. Now 25 and in my first year as a reporter in Miyagi Prefecture, I initially couldn’t imagine that people were still looking for their missing loved ones and friends 10 years after the disaster.

But I learned that in Futomi’s case, the 10-year period carries significance in how his own family came to grips with the death of his brother.

“Why don’t you come to see the search?” he asked me over the phone.

His company’s office in Watari faces Lake Torinoumi, a brackish-water lake that flows into the Pacific Ocean. We set sail from the town on a small vessel last autumn.

Futomi, 43, dived into the water and began poking the seabed with a metal stick.

He left the bicycle there and moved on to other areas.

Futomi said he only keeps records of the location of the objects buried in the seabed and shares the information with the Miyagi prefectural government because equipment or machinery is often needed to dig out those items.

During a roughly one-hour search, Futomi also found something that looks like a utility pole.

“Many items remain buried,” he said.

He has made more than 60 attempts to locate remains and belongings of the missing people by digging in beaches and diving into the sea on the 11th of each month and other occasions.

So far, his activities have found tombstones, safes and children’s gym clothes.

WHEN TO STOP SEARCHING?

“Many of my clients say they want to decide to end their searches for the missing,” Futomi said. “My activities may help them sort out their feelings.”

Of those listed as missing in the disaster, more than 1,200 are residents of Miyagi Prefecture.

On Feb. 8, I accompanied Futomi on a visit to Minami-Sanriku, about 90 kilometers north of Watari, with his client, Eiko Watanabe.

Watanabe’s grandmother, Tsune, 94, was staying at the municipal Shizukawa Hospital when the disaster struck. Tsune and many other patients were swept away by the tsunami that flooded the fourth floor of the building.

Three months later, Watanabe, 57, held funeral for Tsune and put her glasses and false teeth in her grave. But every time Watanabe sees the sea, she thinks of her grandmother.

“She must have felt cold and pain,” Watanabe said.

Futomi will use underwater drones to search for remains and items of Tsune in areas of the seabed where they are most likely to be found.

Watanabe was considering making this the last attempt to uncover traces of her grandmother, regardless of the results.

But she has conflicting emotions deep in her mind.

“I want to find anything that proves that she existed in this world even if it’s only a piece of her or her belongings,” Watanabe said.

When Futomi was a sixth-grader at elementary school, his brother, four years his junior, died from a disease caused by an accident. His once-cheerful mother fell into depression following her son’s death.

Futomi said he long held mixed feelings toward his mother, who kept mourning for his brother.

Ten years after the death, she suddenly called Futomi, who has been living away from his parents since he entered university.

“Why don’t we go for a drive?” she asked him. “It’s been 10 years now, so I’m thinking to change myself. I’m sorry for being unable to care about you.”

Futomi wondered if she had decided to stop grieving on the 10th anniversary of her son’s death. He’s still unable to ask her what changed her mind.

He said he continues to help the tsunami survivors with his searches, believing that some of them, like his mother, will be able to overcome the loss of their loved ones.

“I hope I can offer them an opportunity to move forward,” Futomi said.

PASSING ON ACTIVITIES TO NEXT GENERATION

On Jan. 20, students at municipal Arahama Junior High School in Watari visited Torinoumi Park during their special class activity. The park can serve as a base in the event of a disaster.

“Does anyone know what an emergency bench is?” asked Futomi, who was a lecturer for the class.

When he removed the upper plate of the bench, the students gasped in surprise and gathered around for a closer look inside.

“You can transform this gazebo into a tent by hanging tarpaulins inside the bench from the roof,” he told them.

Since the end of last year, Futomi has been offering special classes on disaster preparedness to local junior high school students, who were young children at the time of the earthquake and tsunami.

“I want them to keep the memories of the disaster alive so that I can pass on my search activities to the next generation,” Futomi said.

The number of those who remain missing is not just a statistic. It carries the feelings of many people, including families who are still looking for their loved ones. I want to continue listening intently to what’s on the survivors’ minds.