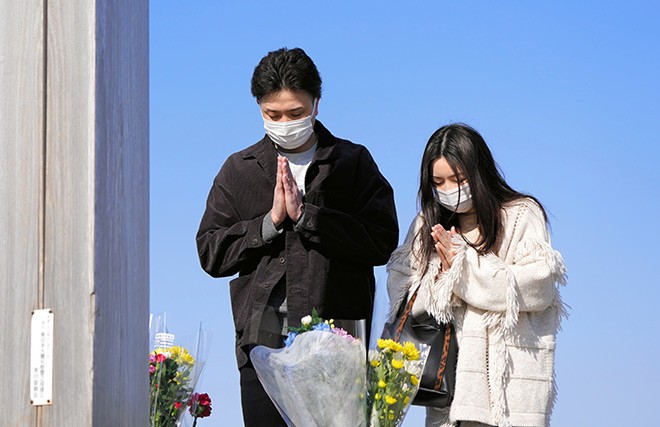 A man who lost his grandmother in the tsunami in 2011 prays with his wife in front of a memorial monument in Sendai on March 11. (Ryo Kato)

Seiichi Koshita kneels in prayer and offers flowers at the foot of his younger brother’s grave in Otsuchi, Iwate Prefecture, remembering how he died 10 years ago while trying to save others.

Fujio was among the nearly 20,000 people who died from the disastrous Great East Japan earthquake and ensuing tsunami that struck the Tohoku region on March 11, 2011.

His gravestone prominently features a fire bell in its design.

Fujio, who was 57, was a volunteer firefighter. He stayed behind, repeatedly ringing the fire bell, urging residents to evacuate from the area.

But because he did, he was engulfed by the tsunami.

When some of his fellow residents told Koshita, 69, that Fujio had saved their lives, he replied, “I am proud of him.”

But his heart sank and he confessed, “Once, I got mad at him and shouted at his remains, ‘Why didn’t you flee?’”

“Truthfully, I wanted him to evacuate,” he said. “We should never have victims like my brother.”

Japan marked the 10th anniversary of the devastating earthquake and tsunami that triggered a triple meltdown at Tokyo Electric Power Co.’s Fukushima No. 1 nuclear power plant.

The massive natural disaster resulted in 22,192 deaths in total--a toll that includes those confirmed dead, deaths related to the disaster, and the people who went missing and have not been found.

According to the National Police Agency, 15,899 people died because of the disaster, while 3,767 related deaths have been confirmed over the past 10 years. Even now, 2,526 people remain missing.

At 11 a.m. on March 11, prefectural police began searching for missing people along the coast of Namie, Fukushima Prefecture.

According to official figures, 151 town residents were confirmed to have died during the disaster while 31 are still considered missing today.

Similar scenes played out in many places.

Hitomi Kurosawa lost her grandmother and uncle to the disaster.

Then, just a few months later, she brought a baby boy into the world.

“I experienced the earthquake and tsunami and also gave birth. I have thought a lot about life for the last 10 years,” she said. “Every time one of my four babies were born, my grandma and uncle appeared in my dreams and protected me.”

The 29-year-old resident of Ishinomaki, Miyagi Prefecture, brought her eldest son, born only four months after the disaster, to a local memorial ceremony on March 11 to mark the somber anniversary.

Officials unveiled a large memorial monument during the ceremony at Ishinomaki Minamihama Tsunami Memorial Park, which is scheduled to officially open at the end of the month.

The names of 3,695 victims have been etched into the monument, which is made of black granite and measures about 34 meters long and 1 meter tall.

“The sadness our families suffer from has not healed,” Kurosawa said. “But the surviving family members will support each other.”

Meanwhile, many of those who managed to evacuate from disaster areas remain displaced a decade on, still living under evacuation orders. In Fukushima Prefecture, it is still hard to tell when the orders will be lifted for most of the difficult-to-return zones.

The number of evacuees has decreased significantly from its peak of about 470,000 people, but it still remains high, at 41,241.

After the triple meltdown, up to roughly 160,000 people--including those who evacuated on a voluntary basis--evacuated from their homes in Fukushima Prefecture.

Although evacuation orders issued for 11 municipalities have been lifted step by step, there is still no clear sign of when orders will be lifted for the difficult-to-return zones that remain in seven municipalities, except for some areas.