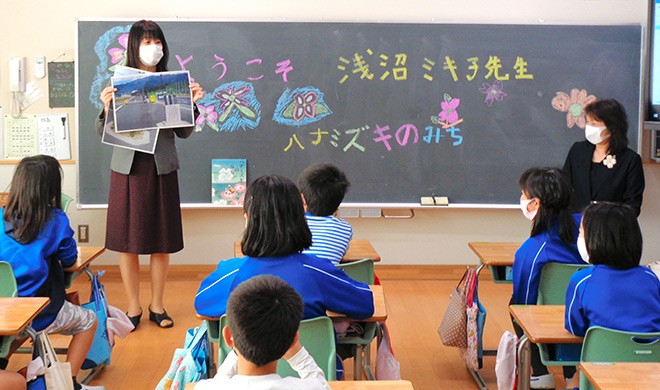 Mieko Konno, left, principal of Takata Elementary School in Rikuzentakata, Iwate Prefecture, on Oct. 20, 2020, introduces a woman who lost her son in the 2011 earthquake and tsunami. (Provided by Mieko Konno)

RIKUZENTAKATA, Iwate Prefecture—In this coastal city, almost everyone has a story of tragedy related to the 2011 disaster.

But teachers at the city-run Takata Elementary School here had shielded the pupils from anything related to the tsunami that tore through the city on March 11, 2011.

School staff were concerned that the children were not old enough to hear about the Great East Japan Earthquake and the towering tsunami that killed 1,761 Rikuzentakata residents, including seven pupils at Takata Elementary School.

But Mieko Konno became principal of the school in April 2020, and she started offering a disaster education program to pupils in autumn.

And on March 11, the 10th anniversary of the disaster, Konno, 59, inspired in part by the “miracle” pine tree that the waves could not knock down, delivered messages of hope to the pupils based on lessons she learned when her parents were killed in the tsunami.

“I want you to keep your dreams and hopes alive and have a sense of gratitude,” she told the pupils at the morning assembly. “And I hope you grow in greatness like the pine tree.”

Konno, a graduate of Takata Elementary School, was working as a vice principal at another elementary school in an inland area of the prefecture at the time of the disaster.

Konno could not contact her parents who were living in Rikuzentakata, and she also had to deal with quake damage to the school, including broken windows.

With powerful aftershocks continuing to rattle the area, Konno was busy communicating with students’ guardians and board of education officials.

Several days later, Konno finally reached her hometown to look for her parents. She found that the family home was swept away by the tsunami.

She visited one temporary morgue after another. When she saw the body of a child who was about the same age as pupils at her school, Konno broke down in tears.

She could do nothing but offer a prayer, “I hope your family finds you soon.”

After around three weeks, Konno finally found her father, Koichi, 77, and her mother, Fusako, 74. Their bodies were at two separate morgues.

Konno became overwhelmed by feelings of remorse over her “rebellious” behavior.

When she was a high school student, Konno was determined to pursue a career in education. But her parents opposed to her plan to attend university, citing money as one reason.

They also said it was a bad idea “because you are a woman.” That triggered a huge argument, and Konno ran away from home.

“I am so sorry,” she told them at the morgues.

Konno studied while working as a city employee and obtained teacher qualifications. She moved around in the prefecture for her work in education.

In April 2020, with retirement in mind, Konno was appointed principal of her alma mater.

Even nine years after the disaster, most teachers there remained hesitant to bring up any topic that could provoke earthquake or tsunami images in their classes, fearing possible psychological damage to the children.

“Isn’t it too soon?” a school staff member once asked Konno.

Konno spent a lot of time wondering and discussing the issue with teachers.

When the talks went nowhere, Konno would take a walk by herself along a route that passed close to the miracle pine tree.

The tree was the only one in a seaside grove that was left standing after the tsunami swamped the city. It became a symbol of survival, resilience and reconstruction amid all of the destruction in the city.

The walking route also took her to the Iwate Tsunami Memorial Museum, which opened in September 2019. Among the exhibits are a fire engine squashed in the tsunami debris as well as videos and testimonies from survivors.

Konno also strolled down a 300-meter path connecting the museum and a newly installed seawall.

The path, called the “axis of prayer,” often brought back memories of her parents. When Konno and her father fought, her mother came in and eased the tension.

Thinking about those days, Konno could only feel regret that she never told them how she felt now: “I was happy to be born to you two. Thank you.”

The countless walks on the path led her to a new determination. She decided to talk about what happened to the city 10 years ago, teach the pupils lessons learned from the disaster, and instruct future generations on how to protect their lives.

“Because I don’t want anyone to go through hardship,” she said.

In autumn 2020, Konno invited a woman whose son was killed by the tsunami to the campus to talk about her experience to the students.

When the woman started talking about her son and the importance of preparing for evacuations, the children listened intently, and some of them wiped tears from their eyes.

One student wrote in a report afterward: “A tsunami destroys everything in a fraction of a second. It is scary. I think it is important to think about evacuation.”

Another wrote, “I felt sadness and loneliness. (The talk) reminded me how happy I am now.”

March 11 not only marked the 10th anniversary of the tragedy, but it was also the first March 11 for Konno to spend at her alma mater.

She said she thought that if her parents were alive, they would surely be delighted that their daughter has become the principal of the school.

In a closing line of her morning speech to the pupils, Konno said, “I want you to carry on and live your lives while thinking about someone you love.”