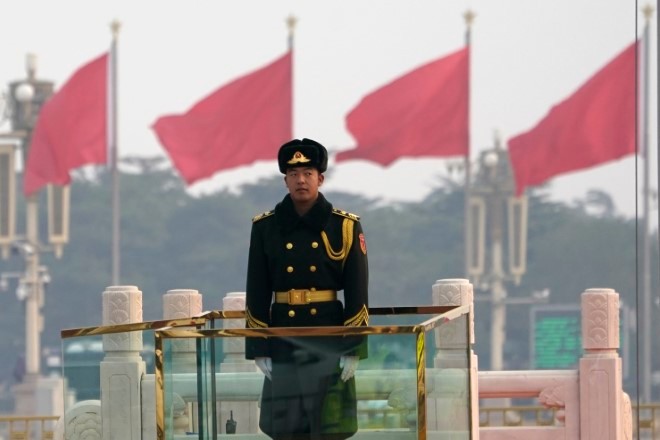 A Chinese paramilitary policeman stands watch on Tiananmen Square near the Great Hall of the People where the closing session of the Chinese People’s Political Consultative Conference was held in Beijing on Wednesday, March 10. (AP Photo)

BEIJING--China’s ceremonial legislature plans to endorse the Communist Party’s latest move to tighten control over Hong Kong by reducing the role of its public in picking the territory’s leaders.

The measure adds to a crackdown against a protest movement calling for greater democracy in Hong Kong. The crackdown has prompted complaints Beijing is eroding the autonomy promised when Hong Kong return to China in 1997 and has hurt its status as a global financial center.

The National People’s Congress, which was due to end its annual meeting Thursday, will endorse “improvements to the electoral system” of Hong Kong, the body’s Standing Committee said. The plan would give a pro-Beijing committee power to appoint more of Hong Kong’s lawmakers, reducing the number elected by the public.

The NPC also was due to endorse the ruling party’s latest five-year development blueprint. It calls for stepping up efforts to transform China into a more self-reliant technology creator--a move that threatens to worsen strains with Washington and Europe over trade and market access.

The legislature has no real power but the ruling party uses its annual meeting, the year’s highest-profile political event, to showcase economic and political plans.

Its approximately 3,000 delegates are picked by the party, not the Chinese public, and routinely endorse decisions already made by party leaders. A symbolic vote of support by the NPC shows an issue is a party priority.

Last year, the party used the NPC session to impose a national security law on Hong Kong. Under that law, 47 former legislators and other pro-democracy figures have been arrested on subversion charges that carry a possible maximum penalty of life in prison.

On Sunday, Foreign Minister Wang Yi defended the latest proposed changes in Hong Kong as needed to protect its autonomy and defend its “transition from chaos to governance.”