As Hakuho turns 36 on March 11, yokozuna still symbol of hope 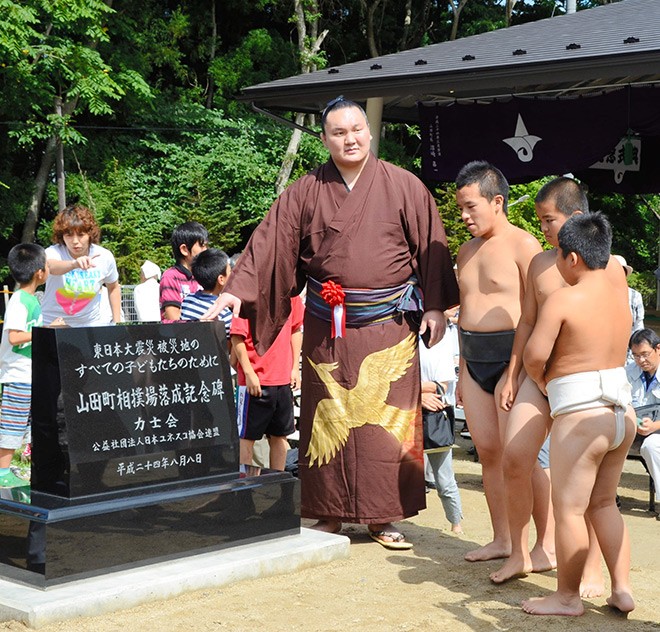 Yokozuna Hakuho stands next to a monument along with local children to mark the rebuilding of a sumo dohyo in Yamada, Iwate Prefecture. (Asahi Shimbun file photo)

When yokozuna Hakuho turned 26 on March 11, 2011, the tragic events that transpired on his birthday that day made him feel it was his destiny to be a symbol of hope and encouragement.

That link to the Great East Japan Earthquake and tsunami has come out not only in Hakuho's comments after sumo tournaments over the years, but also through his efforts to help children in the disaster-stricken areas.

Hakuho, who has won a record 44 Emperor's Cups, remains on top of the sport as he turns 36 on the 10th anniversary of the disaster.

He is aiming to return to the dohyo after injuries sidelined him for much of 2020 and a case of COVID-19 in January made him miss the first tournament of 2021.

“If I show everyone that I am continuing to do my best as yokozuna by producing good results, I feel that will serve to encourage others to also do their best,” Hakuho said.

When the earthquake and tsunami hit 10 years ago, the Japan Sumo Association had decided to cancel the Spring Grand Sumo Tournament because of a bout-throwing scandal.

At that time, Hakuho was the lone yokozuna and also the head of all sumo wrestlers. In that position, he led the way for providing assistance to the rebuilding effort.

Three months after the disasters struck, Hakuko and other wrestlers visited the three hardest-hit prefectures of Iwate, Miyagi and Fukushima. Hakuho performed the yokozuna “dohyo-iri,” ring entrance ceremony that is said to purify the land in front of disaster victims.

Hakuho also learned that a dohyo in Yamada, Iwate Prefecture, where sumo had long been popular, had been swept away by the tsunami. Sumo wrestlers made donations that led to the construction the following year on higher ground of a new dohyo.

It was Hakuho who proposed that all sumo wrestlers in the two highest divisions donate 10,000 yen ($92) a month over a 10-year period to help the rebuilding effort.

At the time of the disasters, Hakuho said, “I don’t know how long I can continue as an active sumo wrestler, but I want to continue being active for the sake of the children who will be in charge of the nation in the future.”

He has expressed his feelings on other important occasions. One time, he said, “I believe doing my best in the dohyo will serve as a form of cheering on of (the disaster-stricken areas).”

Another time, he said, “I hope my winning while doing my best will provide encouragement to the disaster areas.”

SUMO BACK IN PLAY IN TOHOKU REGION

Over the decade since the natural disasters, Hakuho has won the Emperor’s Cup 26 times. On the six times when a tournament bout has been held on March 11, Hakuho has never tasted defeat.

While he continues to hold strong feelings toward the disaster-stricken areas, things have changed at the dohyo constructed in Yamada due to help from the sumo wrestlers.

Tetsuya Sato, 50, works for the town government and was an amateur sumo wrestler. He and his 10-year-old son, Shinji, have been practicing sumo at the rebuilt dohyo from about two and a half years ago.

There has been a steady increase in others who have joined the Satos in the dohyo and now the sumo club has 11 members, from those in day care to children in the fourth grade.

Club members are now practicing so they can enter a team competition in the Tohoku region.

Hearing about the return of sumo to Yamada, Hakuho said, “The 10 years have been a period of cheering on the children of the Tohoku region. All of the sumo wrestlers came together as one to present the dohyo to the town because of their feelings of wanting children to understand the merits of sumo.

"I am glad to hear that the dohyo is now being used for a good purpose.”

ON THE COMEBACK TRAIL

While Hakuho is glad to see a sumo revival in the disaster areas, he himself has faced physical difficulties in recent years.

After the November 2020 tournament, which was the third consecutive one Hakuho sat out, the Yokozuna Deliberation Council issued a rare “caution” to Hakuho and fellow yokozuna Kakuryu for their extended absences from the dohyo.

While Hakuho initially intended to compete in the New Year Grand Sumo Tournament, he came down with COVID-19, forcing him to sit out the entire tournament.

But he has been practicing hard since February with younger sumo wrestlers to rebuild his body and attempt to regain the dominance over the sport that he has long ruled.

All eyes will be on Hakuho as the Spring Grand Sumo Tournament starts on March 14 at Tokyo's Ryogoku Kokugikan. The tournament was moved from the traditional venue in Osaka due to concerns about travel during the COVID-19 pandemic.