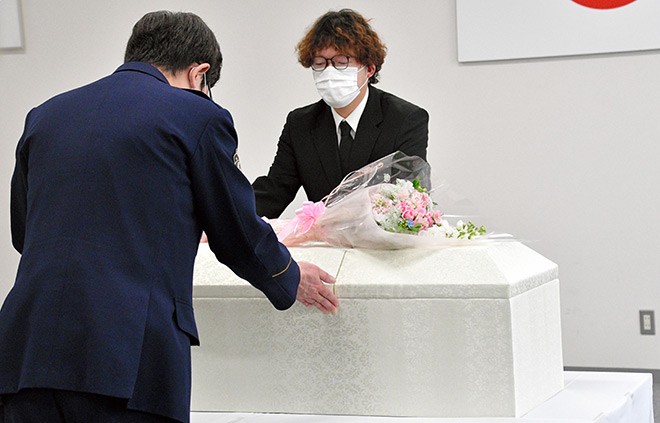 Eiki Okuyama, center, receives the remains of his mother, Natsuko, at the Ishinomaki Police Station in Ishinomaki, Miyagi Prefecture, on March 10. (Shinjiro Omiya)

ISHINOMAKI, Miyagi Prefecture--The remains of a woman who went missing in the 2011 tsunami were returned to her son on March 10, just one day before the 10th anniversary of the disaster.

Remains identified as Natsuko Okuyama were discovered in February in the grounds of a company near her home in Higashi-Matsushima, Miyagi Prefecture.

“There have been many times when I wanted to seek advice from my mother and rely on her over the past 10 years since she went missing,” Eiki said. “I’ll move forward to make the most of my life.”

An employee of a company located near the coast of Higashi-Matsushima’s Nobiru district found a skull on the premises on Feb. 17, according to Miyagi prefectural police. The body was buried in the ground, wearing a Japanese-style apron.

Police matched it to the missing woman through dental records and DNA analysis.

Okuyama, 61, was living with her husband and Eiki at the time of the Great East Japan Earthquake and tsunami. She was likely swept away by the tsunami while evacuating from her workplace following the quake, according to police.