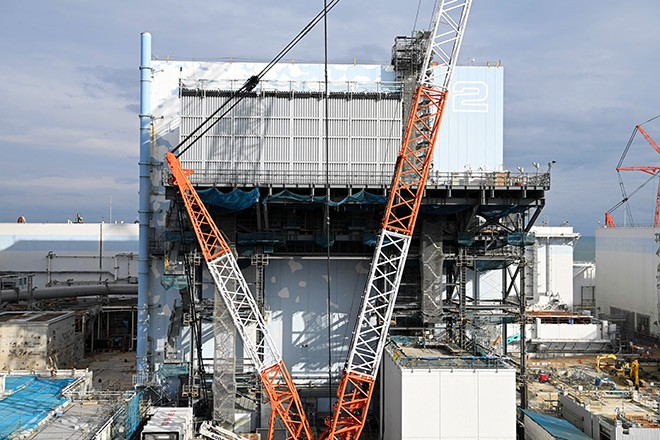 Decommissioning is under way at the No. 2 reactor of the Fukushima No. 1 nuclear power plant in February. (Asahi Shimbun file photo)

The chief of Tokyo Electric Power Co. apologized to victims of the Fukushima nuclear disaster but added that nuclear power generation will still be needed to provide compensation and clean up the stricken plant.

“We are deeply sorry about having caused an enormous burden on and raising concerns among people in Fukushima Prefecture and the public at large,” Tomoaki Kobayakawa, president of TEPCO’s holding company, said in an online interview with The Asahi Shimbun on March 10.

The interview was held a day before the 10th anniversary of the Great East Japan Earthquake and tsunami that caused the triple meltdown at TEPCO’s Fukushima No. 1 nuclear power plant.

Decommissioning the No. 1 plant is already a costly endeavor, and TEPCO plans to complete the process by 2051.

“We need to use nuclear reactors to a certain extent,” Kobayakawa said.

After the nuclear disaster, TEPCO decided to decommission all of its reactors in Fukushima Prefecture--six units at the No. 1 plant and four units at the Fukushima No. 2 nuclear plant.

The decision leaves the utility with only the Kashiwazaki-Kariwa nuclear plant in Niigata Prefecture, one of the largest in the world.

The company is seeking to reactivate the No. 7 reactor at the Kashiwazaki-Kariwa plant, saying operations would significantly cut fuel costs needed to run its thermal power plants.

“Nuclear power does not produce carbon dioxide and is a stable and economic energy source in terms of costs on mid- and long-term basis,” he said. “We should use nuclear energy to some extent based on the premise that we will do so while ensuring safety.”

But TEPCO’s tentative plan to restart the No. 7 reactor in June has been met with growing opposition.

The company is not only accused of causing the worst nuclear accident since the 1986 Chernobyl disaster, but recent missteps have again raised questions about its fitness and ability to safely run a nuclear plant.

According to reports in January, a TEPCO employee entered a central control room at the Kashiwazaki-Kariwa plant using the ID of another employee on Sept. 20.

Three security guards harbored suspicions about the ID, but they let the employee pass through the check.

In addition, the utility has been forced to acknowledge since January that several safeguard measures at the plant were not finished, despite earlier reports stating otherwise, including installation of a fire detector at the No. 7 reactor building.

In response, Kobayakawa pledged to overhaul the corporate culture to strengthen awareness of protecting nuclear material, going beyond a cosmetic fix.

“I am afraid that we were flawed in designing our organization,” he said. “We will get to the bottom of those incidents and repair our corporate culture.”

As for the decommissioning of the Fukushima No. 1 nuclear plant by 2051, Kobayakawa said the current circumstances indicate the company can proceed with the task strategically and as planned.

“We will push for it although it is still possible that we may be forced to change the target if an extremely difficult situation arises due to high radiation levels at the plant,” he said.

He acknowledged that the company was thrown into confusion in the immediate aftermath of the accident, when explosions rocked the plant. He also noted the problems of dealing with contaminated water accumulating at the site.

Regarding the rebuilding of Fukushima Prefecture, Kobayakawa said TEPCO is considering ways to encourage companies to join in the decommissioning process to help revitalize the local economy.

As of January, about 36,000 people were displaced from their homes because of the nuclear disaster, and 80 percent of them were living outside of Fukushima Prefecture, according to the prefectural government.