EDITORIAL: 10th anniversary of disaster is time to move toward nuke-free future 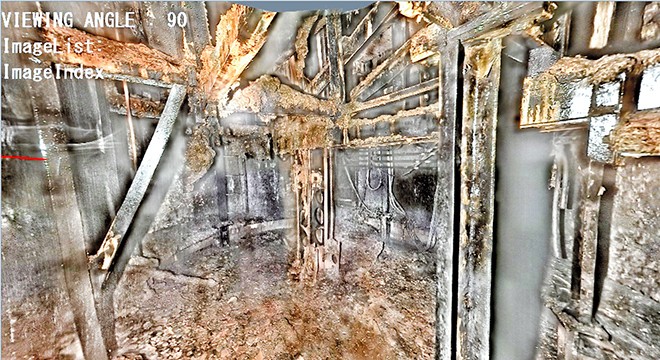 What appears to be melted nuclear fuel is attached near the bottom of the containment vessel of the No. 3 reactor at the Fukushima No. 1 nuclear power plant. (Provided by International Research Institute for Nuclear Decommissioning)

Four months after the Fukushima nuclear disaster, The Asahi Shimbun called on Japan to pursue a future without atomic energy.

An opinion piece published in July 2011 said, “Japan should build a society that does not depend on nuclear power generation as soon as possible.”

Since then, The Asahi Shimbun has repeatedly asserted the importance of phasing out nuclear power generation in editorials and other stories. Our argument for weaning our nation from the use of atomic energy is driven by the fear that another nuclear accident would threaten the survival of Japanese society.

The catastrophe that unfolded at the Fukushima No. 1 nuclear power plant was graphic evidence of the horrifying consequences of a severe nuclear accident. It came as a grim reminder of the fact that in a worst-case scenario, an emergency at a nuclear power plant could spiral out of control and become unstoppable.

With the vivid memories of the reactor meltdowns fading now after a decade from that day, Japan should reaffirm a commitment to move toward a future not dependent on nuclear power.

The past 10 years have forced us to confront the grueling challenge of cleaning up the mess that is left by a major nuclear accident.

Recently, the Nuclear Regulation Authority (NRA) said a huge amount of highly radioactive materials apparently had attached to shield plugs of the containment vessels of the No. 2 and No. 3 reactors at the Fukushima plant.

Radiation levels were estimated at more than 10 sieverts per hour, a lethal dose for anyone who spends even an hour in the vicinity, according to experts. Toyoshi Fuketa, chairman of the NRA, admitted the discovery will make it necessary to “recast the strategy” for retrieving nuclear fuel debris.

In the Nos. 1-3 reactors at the plant, there are an estimated 800 to 900 tons of debris of melted nuclear fuel from the accident, triggered by the 2011 earthquake and tsunami.

But not much is known about the current conditions of the debris. It is not clear, for example, exactly where melted fuel is within the reactors and in what forms.

Removing the highly contaminated shield plugs will add to the enormous difficulty of the already daunting mission.

The previous road map for the work called for debris removal to be completed in 20 to 25 years. But the current one has no time frame for the project.

As long as fuel debris remains within the reactors, there can be no significant progress in dismantling and removing the buildings and facilities.

As water is being poured into the Nos. 1-3 reactors to cool debris, highly radioactive water is accumulating at the site. Since the filtering system is unable to eliminate tritium from the water, the treated water is stored in an increasing number of on-site tanks.

The government and Tokyo Electric Power Co., the operator of the crippled plant, are holding to the target of completing the decommissioning of the reactors in three to four decades. But doubt about the plausibility of the goal is only growing.

The murky outlook of the painstaking and expensive process of decommissioning the reactors inevitably hobbles the efforts to revitalize the local communities.

The Fukushima meltdowns have brutally underscored the devastating damage a severe nuclear accident can inflict on local communities. Rebuilding the ravaged communities takes a very long time. Such a tragedy should not be allowed to occur again.

During the seven years and eight months of former Prime Minister Shinzo Abe’s rule and subsequent years, however, the trend is toward returning to heavy dependence on nuclear power generation.

In 2012, the government led by the Democratic Party of Japan proposed phasing out nuclear power generation by the end of the 2030s after broad public debate including deliberative opinion polls.

After it returned to power at the end of that year, however, the coalition of the Liberal Democratic Party and Komeito switched the energy policy to promoting nuclear power generation without much serious policy debate.

The number of operating reactors in Japan has declined by about 20 due mainly to decisions to dismantle aging ones. But the Abe administration set a target of raising the share of nuclear power in the nation’s total power output to close to pre-accident levels.

The nuclear safety rule that imposes a 40-year limit on the operational lifespan of reactors, introduced after the Fukushima accident, has been made increasingly irrelevant. That's because a provision that allows one extension of the legal lifespan by up to 20 years in exceptional cases has been widely exploited to keep aging reactors operating years beyond the 40-year cap.

Prime Minister Yoshihide Suga’s administration has basically carried on the nuclear power policy of his predecessor and pledged to “make the most of” the reactors available.

While saying it will try to reduce the nation’s dependence on atomic energy as much as possible, the Suga administration has been seeking to restart offline reactors without offering any plan to deliver on its promise. It has taken an extremely insincere stance toward the issue.

In promoting reactor restarts, the government has tried to ease public anxiety about the safety of reactors by stressing that Japan’s new nuclear safety standards are the toughest in the world. We cannot help but wonder if this claim is creating a new myth about the safety of nuclear power generation.

It is also difficult not to be worried about complacency among electric utilities operating reactors. TEPCO, which is responsible for the disaster, has been accused of ethical lapses related to the safety of its nuclear power plants.

An employee of the firm was allowed to gain unauthorized access to the core facility of a nuclear plant, and the company had failed to report insufficient quake resistance of a key facility at the same plant to the NRA.

Still, there are many loud voices clamoring for expansion of nuclear power generation, especially within the business community.

Discussions at the advisory council for the industry ministry over the planned revision of the government’s basic energy plan echo the trend.

Nuclear power generation is vital for Japan’s energy independence, one panel member has said. The legal operational life of a reactor should be extended to 80 years, another has argued. These people appear to have forgotten the shock wave the accident sent through society.

It is surprising to learn that some members of the council are even calling on the government to promote the nuclear fuel recycling program, which has clearly lost its viability. The program involves recovering plutonium from spent nuclear fuel for recycling back into new fuel.

However, this process will produce tons of plutonium that cannot be used as fuel because the plan to develop a fast reactor that can "consume" plutonium has gone awry.

If it starts the recycling program under the current circumstances, Japan will face serious international criticism over its growing stockpile of plutonium, a material that can also be used to make nuclear weapons.

The cozy, collusive relationship between the government and the power industry based on the “nuclear safety myth,” a key factor behind the accident, should be dismantled.

EXPAND USE OF RENEWABLE ENERGY

If the government remains fixated on promoting nuclear power generation, Japan will end up failing to ride the wave of technological innovations for a carbon-free society powered mainly by renewable energy and hydrogen.

The path toward a nuclear-free society will become visible if only the government decides to retire reactors that are in service for 40 years and approve no plan to build new reactors or rebuild existing ones.

The lessons from the Fukushima disaster will bear fruit only if Japan takes a solid first step toward an end to nuclear power generation.