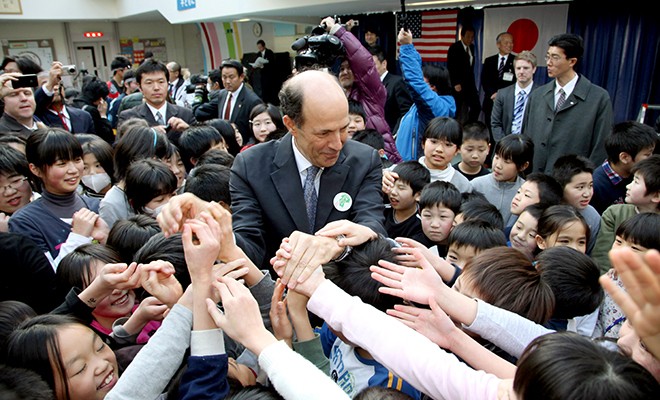 But the thing that stands out most in his mind even after the passing of 10 years is the “incredible strength and resilience” of the people in the Tohoku region, he said.

Roos, at a March 10 virtual event titled, “Remembering March 11, 2011: Looking Back, Looking Forward,” hosted by the U.S.-Japan Council and other organizations, said, “Like everyone else, I have distinct memories of the fateful day.”

Roos was on the ninth floor of the U.S. Embassy in Japan in Tokyo with his senior staff when the earthquake hit and the building started shaking, a duration that he said “seemed like an eternity.”

“We thought the embassy was going to collapse, and, quite frankly, we were not going to survive.”

Roos and his staff evacuated the embassy safely and gathered in a parking lot, but it was only the beginning, as he started to think about the U.S. response to help its ally.

As they “began to get a sense of the challenge that laid ahead of us,” Roos was busy on the phone with the State Department, the White House and U.S. Forces Japan.

Soon, he and staffers began to see the images of the tsunami engulfing communities in the Tohoku region on their cellphones.

“Several minutes later, one of our Japanese staff in the embassy came up to me and said she just talked to the Defense Ministry and a nuclear crisis, or nuclear situation, was developing,” Roos recalled.

From that moment on, “all of the pressure seemed to be converging on the U.S. Ambassador’s office,” Roos said about the task of coordinating rescue and relief missions that involved not only the Japanese and U.S. governments but also governments of other nations.

As the crisis at the Fukushima No. 1 nuclear power plant unfolded and deepened by the minute, Roos received a sobering assessment from a senior White House staffer.

“There was a 50 percent chance that within 24 hours, the Fukushima situation could turn into a Chernobyl, or even worse than a Chernobyl,” Roos recalled the staffer saying, eliciting the 1986 nuclear disaster in Ukraine.

Even worse, a senior military official came to Roos and said, “There is a possibility that Tokyo could become a contaminated wasteland.”

Roos said a nuclear expert informed him, “We were in unchartered territory and things could get worse.”

Roos said, as the ambassador, he focused on commitments to ensure the health and safety of Americans in Japan and strengthen the Japan-U.S. relationship during the crisis.

Twelve days after the tsunami, Roos and his team took a helicopter tour over the disaster-stricken region.

“The amount of devastation was something I’d never seen in my life and obviously hope to never see again,” he said.

He also witnessed something else that has never left him.

At an evacuation center in Ishinomaki, Miyagi Prefecture, Roos met a boy who looked to be about 10 to 12 years old.

“As I was addressing the evacuees, I think he could tell I was a little shaken up," Roos said. "And after all he had gone through, this young kid came up to me and put his arms around me and gave me a hug and made me feel that much better.

"To this day, I think of the young people in the Tohoku region and all the people there and their incredible strength, their resilience, and we hear story after story."

Roos spearheaded the U.S. military’s Operation Tomodachi, which involved major relief efforts in the Tohoku region and also helping to bring the crisis at the Fukushima No. 1 nuclear plant under control.

Roos also visited the Tohoku region many times during his tenure as the U.S. ambassador, which continued until 2013.

“I am just proud that I, along with my colleagues, could play a tiny part in helping the Japanese through that incredible crisis of March 11,” he said.