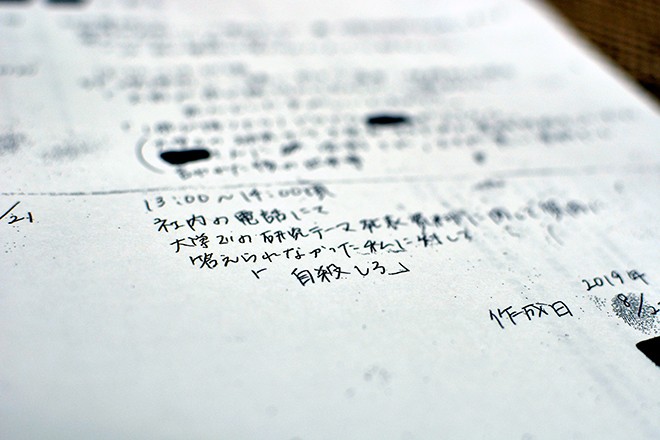 The note left behind by a rookie employee at Mitsubishi Electric Corp. before he committed suicide lists remarks, including “Commit suicide,” allegedly made by his superior to the man. (Asahi Shimbun file photo)

Labor authorities have officially recognized the death of a young rookie employee at Mitsubishi Electric Corp. in 2019 as a work-related suicide, prompting the company to vow it will further punish top brass over the incident.

The incident followed power harassment by the man’s superior, who used harsh language toward the man during training, according to an in-house investigation. The superior reportedly told him to “die.”

The Amagasaki Labor Standards Inspection Office in Hyogo Prefecture approved a claim filed in September 2020 by the man’s bereaved family over his death. The decision came on Feb. 26.

The family’s lawyer believes that power harassment from a senior staff member tasked with instructing the rookie employee, who was in his 20s, was a major factor behind the inspection office’s decision.

“Now that his suicide has been certified as work related, we want the entire company to make an earnest effort to improve the work environment,” the victim’s family said in a statement released through their lawyer.

Mitsubishi Electric said it will further punish its president, Takeshi Sugiyama, and other executives following the decision by the Amagasaki inspection office.

This is the fourth death by a staff member at Mitsubishi Electric and its subsidiary to be recognized as a work-related suicide since 2014. It is unusual for one company group to have this many consecutive work-related suicides of employees certified as such.

The rookie employee was an engineer assigned in July 2019 to the manufacturing technology center in Amagasaki, Hyogo Prefecture.

He took his own life in a park in Sanda in the prefecture near a company dorm in late August that year.

A note found next to his body lists remarks that he alleged the senior staff member had made to him. “There’s a window that’s perfect for you to jump from,” one read. “Wouldn’t it be better if you just died?”

According to several sources, the rookie employee was being instructed by the senior staff member on how to write documents for a company technology presentation scheduled a few days after the date when he committed suicide.

Mitsubishi Electric issued a statement on March 11 saying it takes the decision by the Amagasaki inspection office seriously and that it will respond sincerely to the matter.

The Sanda Police Station in Hyogo Prefecture sent papers to prosecutors in November 2019 alleging the senior staff member had instigated the rookie employee to commit suicide--a rare instance in which power harassment is deemed a more serious criminal act.

The Kobe District Public Prosecutors Office announced in March 2020 that it decided not to indict the senior employee due to insufficient evidence.