Prime Minister Suga to U.S. in April for 1st in-person summit with Biden 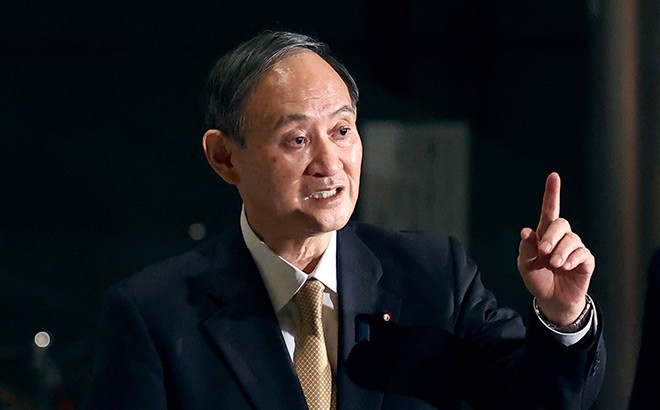 Japan’s government announced Friday that Prime Minister Yoshihide Suga will travel to Washington next month for his first face-to-face summit with President Joe Biden after he and his entourage complete their COVID-19 vaccinations.

Chief Cabinet Secretary Katsunobu Kato said Suga is expected to be the first foreign leader that Biden meets with since he took office in January. The trip is expected to take place in the first half of April.

Kato said the two leaders are expected to discuss pandemic measures, climate change and other regional concerns including North Korea.

The meeting is also likely to touch on China’s escalating assertiveness in the East and South China seas, which have become a growing concern for Tokyo and Washington.

“We hope to further strengthen our bilateral relations including the Japan-U.S. alliance and to confirm our close cooperation toward achieving a free and open Indo-Pacific,” Kato said. “It would be a good opportunity for us to show the rest of the world the close unity of the Japan-U.S. alliance and the U.S. commitment to the Indo-Pacific region.”

China has built and militarized manmade islands in the South China Sea and is pressing its claim to virtually all of the sea’s key fisheries and waterways. Japan is concerned about China’s claim to the Japanese-controlled Senkaku Islands, called Diaoyu in China, in the East China Sea.

China has denied it is expansionist and said it is only defending its territorial rights.

The prime minister and all 80-90 accompanying staff will receive two doses of a coronavirus vaccine before the trip, Kato said, noting that Biden and all the White House staff they will meet have already been vaccinated.

Suga has had online talks with Biden and on Friday was to join a virtual summit of the leaders of Australia, India, Japan and the U.S., a group known as “the Quad” that shares concerns about China’s growing economic and military might.