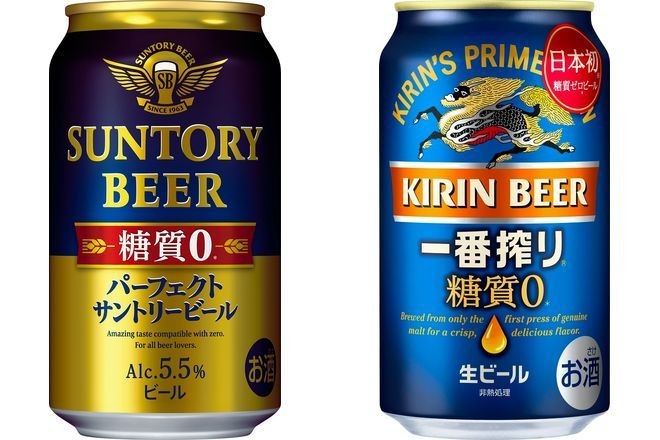 Mass-produced beers with no sugar content. That's one of the options facing beer lovers as two of the nation's four leading breweries opt to tap into the growing market of at-home drinkers and woo health-conscious imbibers.

Suntory Beer Ltd. says its new product will boast 5.5 percent alcohol by volume with a refreshing aftertaste. Kirin Brewery Co. blazed the trail last fall with its version that has 4 percent alcohol.

The marketing ploy was driven in part by a growing fad to drink at home due to restrictions on bar closing times as a result of the COVID-19 pandemic. The breweries are also keen to attract drinkers who pay particular attention to their health.

The addition of sugar is traditionally a vital part of beer brewing, so removing all sugar content from the fermentation process is said to be a difficult feat from a technical perspective.

“The company name and the word ‘perfect’ are included (in the product name), so we have no paths to retreat down,” said Tatsuo Wada, head of Suntory’s marketing department, at a news conference held through an online stream on Feb. 24. “We will pitch the product as the standard beer for the new era.”

Suntory is aiming to ship 2.3 million cases of Perfect Suntory Beer by December.

A number of sugar-free or low-sugar products have already been marketed in the field of imitation beer, but eliminating sugar from the beer process altogether while retaining flavor was considered a daunting task because much more malt must be used.

In brewing processes, starch is converted into sugar with the help of malt-derived enzymes.

The sugar is then broken down into alcohol and carbonic acid gas with yeast in the fermentation phase. Sugar remains in the finished product as yeast cannot dissolve it all.

Suntory decided to develop the fermentation process where yeast can decompose sugar more efficiently and prolong the fermentation so that all sugar content is broken down. The company spent five years perfecting Perfect Suntory Beer.

Kirin, the pioneer in the business, put out a non-sugar product under the Ichiban Shibori brand last October. It proved so popular that 2.5 million cases sold within four and a half months.

The brisk sales were buoyed by not only the rising number of at-home drinkers but also changes in the liquor tax system that allow beer to be purchased more cheaply.

Kirin also took five years to come up with the finished product.

“From the selection of ingredients to determining the conditions of each process, we created a prototype far more times than for any other products,” said Aiko Hiromasa, a Kirin official involved in the development.

“Since the product was to be released under the Ichiban Shibori brand, we could not have made it commercially available if we had failed to achieve a satisfactory level of taste,” Hiromasa added.

Although Sapporo and Asahi marketed sugar-halved beer products in 2008 and 2016, respectively, they withdrew from the business due to “the limited number of repeat consumers,” among other reasons.

Asked about sugar-less beer, an Asahi representative said the company “will consider handling that type of product if a certain level of flavor that satisfies customers can be achieved.”

Sapporo said it is “weighing a range of possibilities” but that “there are nothing to talk about as of now.”