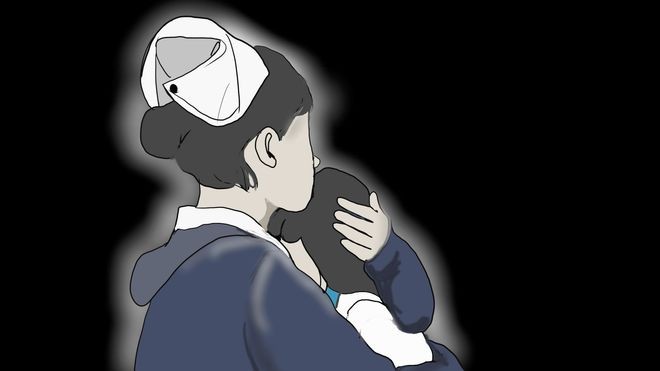 The subject matter is at once jarring and fraught with real-life tragedy, unlike many anime works on the market today.

And that is due to the efforts of a group of residents of Fukushima Prefecture to create anime and picture books to hand down memories of the 2011 nuclear crisis to posterity.

The residents, whose lives were transformed by the triple meltdown at the Fukushima No. 1 nuclear power plant, are working with their supporters to turn their experiences into stories in the hope the tragedy will never be repeated.

Fukumoto, 64, pitched 170 or so kamishibai titles inspired by folktales from areas stricken by the 2011 earthquake and tsunami disaster that triggered the nuclear accident as well as accounts of people whose lives were irrevocably changed by the events of March 11 a decade ago.

“Stories from the mouths of victims have the potential to convey their emotions of the time and portray their suffering, much like those provided by hibakusha survivors (of the 1945 atomic bombing) in Hiroshima,” said Fukumoto.

His kamishibai have been shown in and outside Japan by a number of entities, including Namie Machimonogatari Tsutaetai (Namie town story telling team), a group comprised mainly of residents of Namie, Fukushima Prefecture.

As this year marks the 10th anniversary of the triple disaster, they decided to adapt the kamishibai into anime to share lessons learned from the event with others.

Ten titles were selected from among all the kamishibai works that had been made to date with victims serving as “voice actors.” Accompanied by a 14-page, A4-size illustrated book to summarize the content of each anime, six of them have been completed to date.

Yoko Oka, 60, a member of the storytelling group who evacuated from Namie to Fukushima city, and her 31-year-old daughter, Misato, play characters based on the mother and offspring in one of the anime.

The production is titled “Namie Oyako Hinan Monogatari: Watashi wa Kaeranai” (The evacuation story of a mother and daughter in Namie: I shall not return).

“My hope is that viewers will empathize with the feelings of the dead or those who cannot return to their hometowns by retracing what we experienced, allowing them to recognize how valuable ordinary life is so that the lessons can be passed down to the next generation,” said Oka.

Actor Yasuo Daichi, 69, is also part of the animation project and plays the role of the protagonist in “Namie-machi Shobodan Monogatari: Munen” (The story of a fire brigade in Namie: Regret), an anime work released five years ago prior to other creations.

When recording for the anime wound up, Daichi noticed that disaster victims who attended were overcome with emotion and had tears in their eyes. He was deeply affected to witness firsthand “the deep sorrow they were suffering.”

“It (working on the program) made me notice that genuine happiness lies in helping others,” said Daichi, who is featured in the other five anime as a storyteller.

The package of an anime DVD and picture book is available for 2,000 yen ($18.39). The package can be purchased directly from the production committee by email at (matimonogatari@hotmail.co.jp). There are plans to donate them to schools.