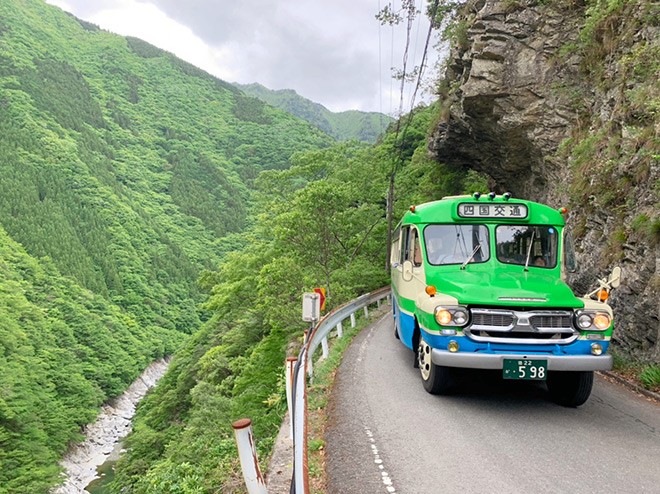 The “bonnet bus” runs on a cliff road along the Iyagawa river in Miyoshi, Tokushima Prefecture, in May 2019. (Asahi Shimbun file photo)

The vehicle, built in 1966, is the last remaining one in Miyoshi after others were retired or transferred elsewhere.

The bust has fallen into disrepair, making maintenance work troublesome and parts procurement difficult, according to its operator, Shikoku Kotsu Co.

The bonnet bus gets its name from its classic layout that exposes the engine bonnet (hood), as opposed to the more modern cab-over engine layout. The vehicle dominated public road transport decades ago.

The bonnet bus was used for community routes in Miyoshi until it switched over to a regular tourist service in 1982. It proved popular among inbound tourists for its roundish and retro appearance.

The bus was originally slated for retirement at the end of 2020. But it only ran for about two months last year due to the novel coronavirus pandemic and the plan was delayed by a year.

“It sometimes breaks down and becomes stranded while it is in operation, and we can’t cause any more trouble for passengers,” said a Shikoku Kotsu representative. “We don’t know how the pandemic will turn out, but we want fans to enjoy the ride for one last time.”

The bus will be operated on weekends and holidays from April to June and in October and November. Capacity will be limited to 11 or so to prevent the spread of COVID-19.

The tour will take passengers to the vine-made Kazurabashi bridge of Iya, a bronze statue of a boy urinating from a rock overlooking the Iyakei valley and other sightseeing spots before returning to JR Awa-Ikeda Station.

Passengers will also be treated with a lunch of local cuisine and have time to take a pleasure boat ride in the Oboke valley.

The tour costs 8,800 yen ($81) for adults. Reservations can be made three months in advance.