More pressure on Mizuho after fourth glitch in two weeks 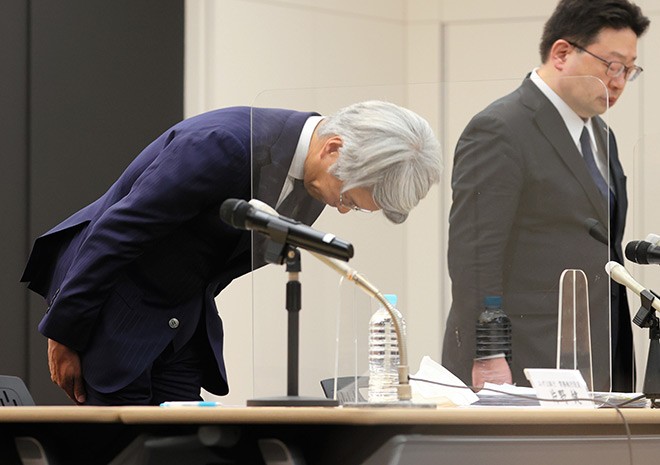 Operations at Mizuho Bank were paralyzed by a fourth computer malfunction in two weeks, raising more questions about the megabank's management.

Fujiwara said that about 300 money transfers were delayed for up to seven hours.

“A series of problems have arisen and I express my deepest apology while taking this matter very seriously,” he added.

When asked if he would resign to take responsibility, Fujiwara said he felt his immediate duty was to ascertain the cause of the problems to ensure they do not recur.

In past news conferences, Fujiwara promised to expediently look into the matter and report the findings, but that schedule has been pushed back as no one at Mizuho Bank is apparently certain the problems are inter-related.

The initial glitch occurred on Feb. 28 when Mizuho Bank’s ATMs around the nation failed to function properly, with some “eating” the bank cards and books of customers.

The latest problem arose at 11:39 p.m. on March 11 at the data center that controls the entire computer system. When a computer that handles the receipt of foreign currency transfer files malfunctioned, bank officials faced problems trying to replace it with a backup.

At 3:50 a.m. on March 12, the malfunctioning hardware was finally replaced and the computer system went back online at 6:38 a.m.

But the program for settling foreign exchange transactions did not get back on track until 12:55 p.m. delaying the completion of all transactions until 7:46 p.m.

To complete the transactions as planned on March 12, bank officials contacted the banks that initiated the money transfers to ensure the right amounts were transferred.

Mizuho Bank installed a new computer system in 2019 due to repeated malfunctions in the old setup.

Fujiwara stopped short of faulting the new computer system for the latest string of problems, stating only that a study would be made to determine what caused the hitches. In this context, he said the computer specifications would also be closely examined.

At one point on Feb. 28, as many as 4,318 ATMs malfunctioned, with 5,244 cases of customers temporarily losing their bank cards and books to the machines.

Similar problems emerged on March 3 and 7 at the bank’s ATMs.

The Financial Services Agency is taking the matter very seriously and has instructed Mizuho Bank to submit a report about the problems and the causes.