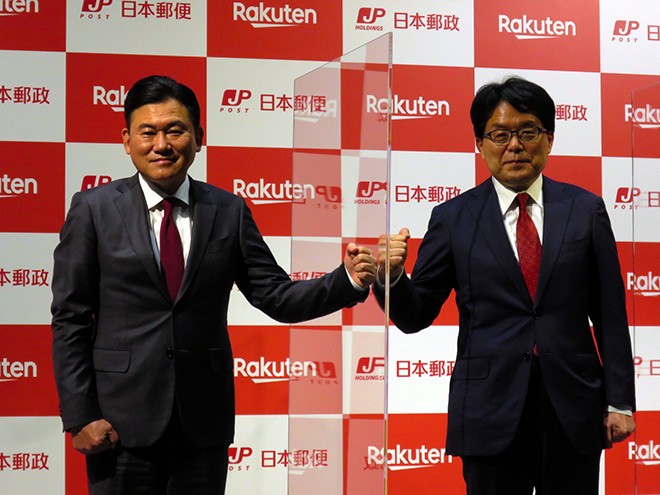 Online retailing giant Rakuten Inc. will receive its biggest capital injection since its establishment in 1997 with the bulk of it coming from Japan Post Holdings Co. to help it develop its still fledging mobile phone operations.

The 150 billion yen ($1.4 billion) investment by Japan Post Holdings will make it Rakuten’s fourth largest shareholder and give it a roughly 8-percent stake in the company.

In addition to Japan Post Holdings, Rakuten will also receive capital from a subsidiary of Chinese information technology company Tencent Holdings Ltd. as well as U.S. retailer Walmart Inc. The total capital injection will come to about 242.3 billion yen.

Rakuten is a latecomer to the mobile phone business, having only begun full-scale operations in April 2020. It is now setting up base stations around the nation and plans to cover about 96 percent of the population this summer.

But the move comes at a hefty price, leading Rakuten to record a net loss of 114.1 billion yen for the fiscal year that ended in December. It was the second straight year for Rakuten to chalk up a net loss. Its capital-asset ratio as of the end of 2020 fell under 5 percent.

Rakuten has already met its initial goal of 3 million subscribers to its mobile phone service. But as other major carriers are now locked in a price war, Rakuten cannot expect to collect large fees from its users.

The capital tie-up with Japan Post Holdings also includes an agreement to allow Rakuten to sign up new mobile phone subscribers at post offices around Japan as well as install base stations on the roof of post offices, operated by Japan Post Co.

Japan Post will also give Rakuten executives positions to help it move toward digitalization of its operations.

Other topics to be discussed in the future concern cooperation in financial settlement services and insurance.

“Rakuten is the best partner for us,” said Hiroya Masuda, president and CEO of Japan Post Holdings, at a March 12 news conference to announce the agreement. “We want to create maximum synergy by bringing together the characteristics of both the digital and real worlds.”

Rakuten Chairman and CEO Hiroshi Mikitani normally holds news conferences in a T-shirt but this time he made a rare appearance in a suit.

“There has never been a partnership in the world between a company with a history as long as Japan Post Holdings and a (relatively new) venture capital company like us,” Mikitani said.

(This article was written by Ryo Inoue and Yoko Masuda.)