At least 12 killed in protests in Myanmar 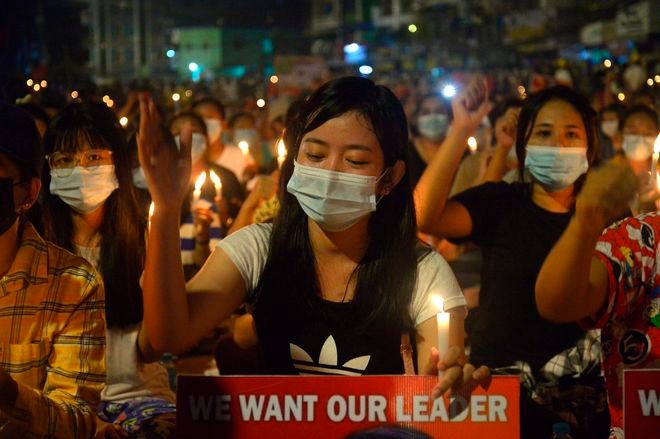 Myanmar security forces killed at least 12 people, witnesses and media reported, as the acting leader of a civilian parallel government vowed in a first public address on Saturday to pursue a "revolution" to overturn the Feb. 1 military coup.

Another person was killed in the central town of Pyay and two died in police firing in the commercial capital Yangon, where three were also killed overnight, domestic media reported.

"They are acting like they are in a war zone, with unarmed people," said Mandalay-based activist Myat Thu. He said the dead included a 13-year-old child.

Si Thu Tun, another protester, said he saw two people shot, including a Buddhist monk. "One of them was hit in the pubic bone, another was shot to death terribly," he said.

In Pyay, a witness said security forces initially stopped an ambulance from reaching those who were injured, leading to one death.

A truck driver in Chauk, a town in the central Magwe Region, also died after being shot in the chest by police, a family friend said.

A spokesman for the junta did not answer phone calls from Reuters seeking comment. Junta-run media MRTV's evening news broadcast labelled the protesters as "criminals" but did not elaborate.

More than 70 people have been killed in Myanmar in widespread protests against the military's seizure of power, the Assistance Association for Political Prisoners advocacy group has said.

The deaths came as the leaders of the United States, India, Australia and Japan vowed to work together to restore democracy in the Southeast Asian nation and the acting leader of the country's ousted civilian government addressed the public for the first time.

Mahn Win Khaing Than, who is in hiding along with most senior officials from the ruling National League for Democracy Party, addressed the public via Facebook, saying, "This is the darkest moment of the nation and the moment that the dawn is close".

He was appointed acting vice-president by representatives of Myanmar's ousted lawmakers, the Committee for Representing Pyidaungsu Hluttaw (CRPH), which is pushing for recognition as the rightful government.

The group has announced its intention to create a federal democracy and leaders have been meeting representatives of Myanmar's largest ethnic armed organizations, which already control vast swathes of territory across the country.

"In order to form a federal democracy, which all ethnic brothers, who have been suffering various kinds of oppressions from the dictatorship for decades, really desired, this revolution is the chance for us to put our efforts together," Mahn Win Khaing Than said.

He said the CRPH would "attempt to legislate the required laws so that the people have the right to defend themselves" and that public administration would be handled by an "interim people's administration team".

A civil disobedience movement that started with government employees such as doctors and teachers has expanded into a general strike that has paralyzed many sectors of the economy and taken a large portion of the workings of government out of the military's hands.

Saturday's protests erupted after posters spread on social media urging people to mark the death anniversary of Phone Maw, who was shot and killed by security forces in 1988 inside what was then known as the Rangoon Institute of Technology campus.

His shooting and that of another student who died a few weeks later sparked widespread protests against the military government known as the 8-8-88 campaign, because they peaked in August that year. An estimated 3,000 people were killed when the army crushed the uprising.

Aung San Suu Kyi emerged as a democracy icon during the movement and was kept under house arrest for nearly two decades.

She was released in 2010 as the military began democratic reforms. Her National League for Democracy won elections in 2015 and again in November last year.

On Feb. 1 this year, the generals overthrew her government and detained Suu Kyi and many of her cabinet colleagues, claiming fraud in the November elections.

The coup in Myanmar, where the military has close ties to China, is a major early test for U.S. President Joe Biden.

The U.S. President held a virtual meeting with the Indian, Japanese and Australian leaders on Friday, the first official summit of the group known as the Quad, as part of a push to demonstrate a renewed U.S. commitment to regional security.

"As longstanding supporters of Myanmar and its people, we emphasize the urgent need to restore democracy and the priority of strengthening democratic resilience," the four leaders said in a statement released by the White House.

Addressing the U.N. Human Rights Council in Geneva, he called for a united approach to "strip away the junta's sense of impunity."

Former colonial power Britain on Friday warned its citizens in Myanmar to leave and South Korea said it would suspend defense exchanges and reconsider development aid to Myanmar.

The Kremlin said Russia, which has close ties to Myanmar's military, was concerned over the mounting violence and was "analyzing" whether to suspend military-technical cooperation.

The U.N. Security Council this week dropped language from a statement that condemned the army takeover as a coup, due to opposition by China, Russia, India and Vietnam.