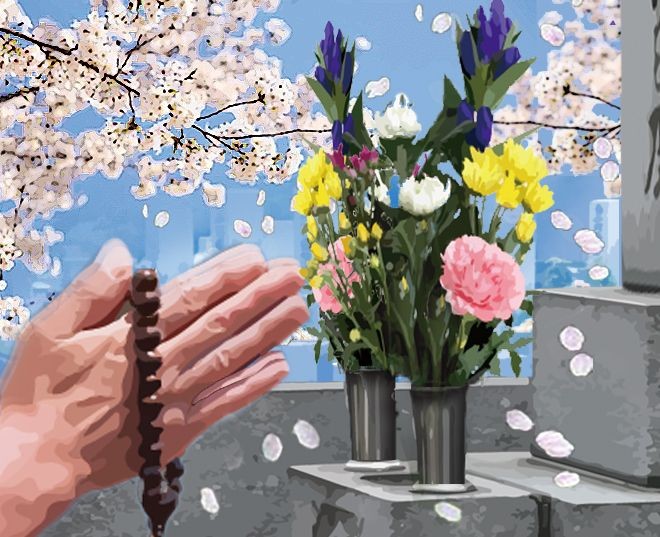 crushed down house
from among its ruins
a mirror shines
--Zelyko Funda (Varazdin, Croatia)

No thanks for
dividing the States
goodbye Trump

After tomorrow’s vernal equinox, haikuists can sing ‘hello spring, goodbye winter.’ Teiichi Suzuki knows the sun’s path is headed for a point directly above the Earth’s spinning equator. Vera Constantineau said hello, at noon, with her debut haiku to this column. She is the Poet Laureate of Greater Sudbury, Ontario.

In and out
through a revolving door
vernal equinox day

end of winter--
outside stormy wind, on the stove
pot-au-feu

Yutaka Kitajima doesn’t think removing six names from a list of nominees for the Science Council of Japan was a well-balanced decision.

While vacationing at a seaside resort in India, Masumi Orihara recited this translation of a haiku by Yosa Buson (1716-1784): the rape flower field the moon in the east the sun in the west. Then wrote one of her own.

By the time John Zheng made his final stroke, winter transitioned to spring in Murfreesboro, Tennessee: empty golf course winter sun drags its light away.

Tsanka Shishkova sang this one-liner in Sofia, Bulgaria, about the way life used to be: strawberry fields ... Beatles ... my dad and me. Kanematsu might have whistled John Lennon’s 1967 refrain, “I read the news today, oh boy.” The lyrics about a deadly accident continue, “About a lucky man who made the grade. And though the news was rather sad.” Eleven-year-old Madelyn Rivera reported on the first spring gale to hit Misawa, Aomori Prefecture.

Raw winds
the coldness
inside

Beans are so cold-hardy they can be planted as soon as the ground can be worked, according to Maria Teresa Sisti in Massa Carrara, Italy.

Giuliana Ravaglia marveled at an example of pilgrimage in Bologna, Italy. Milan Rajkumar worshipped in the sunshine in Imphal, India.

green climbing
on the old wall--
rosary of hope

Dubravka Scukanec was startled at dawn in Zagreb, Croatia. Jane Beal is wary of cat-scratch fever in Santa Cruz, California.

awakening
the first tweet of blackbird
near the cemetery

a cat
scratching
the inside of my heart

Kanematsu was serenaded at sunrise. Later in the day, he felt a sunbeam pulling him toward a paradise, he said, “as if there were nothing to worry about.” Animals, including humans, are seasonal and respond to changes in the light-dark cycle.

Close to me
basking in the sun
the next world

Spring popped up face to face with Dina Towbin in Washington, D.C. Ed Bremson splashed aftershave on his face in Raleigh, North Carolina.

covid spring...
the scent of lavender
in my face mask

scent of pine
from mountain glaciers
my car’s air freshener

no wind...
the scent of pines
floats in the air

on a pine branch
screened from the storm
different feathers

Vandana Parashar hiked to a hill station in Panchkula, India. Asauli is a popular hill covered in pine forests. The haikuist may have brought back more than souvenirs; forest walks improve stress management and mental health, according to a research team led by Shinichiro Sasahara at the University of Tsukuba.

In the Scottish Highlands, Xenia Tran took advantage of a positive spin. John Hawkhead juxtaposed ebb and flow in Bradford on Avon, England. Ramona Linke was ready for the rebound in Beesenstedt, Germany.

ascending moon
we graft the roots
of our evergreen

birth pangs
the gradual dilation
of a new moon

what do they think?
the fish in my chowder
tapioca eyes

Global warming is disrupting the orderly flow of the seasons. Bamboo shoots normally appear in spring. Bamboo also sheds leaves at that time, so Randall Herman referred to the climate crisis where he lives in Victoria, Texas, as the fall season of bamboo.

For the past century, the cherry blossom season has been starting earlier year by year, and global warming is affecting those seasonal changes. Helga Stania opened a container filled with tea leaves in Ettiswil, Switzerland. Goran Gatalica’s mother in Daruvar, Croatia, holds a cherished memory painted on bone china. Jay Friedenberg is president of the Haiku Society of America and a professor of psychology.

backyard reverie
a swirl of petals sweeps me
into a dream

Spring fresh haiku at http://www.asahi.com/ajw/special/haiku/. An Asahi Haikuist Special column appears March 26 to share the results of the Matsuyama Photo Haiku Contest supported by The Asahi Shimbun. The next regular issues of the Asahi Haikuist Network will be published April 2, 16 and 30. Readers are invited to send haiku about laughing mountains, springtide or planting your garden on a postcard to David McMurray at the International University of Kagoshima, Sakanoue 8-34-1, Kagoshima, 891-0197, Japan, or e-mail to mcmurray@fka.att.ne.jp.