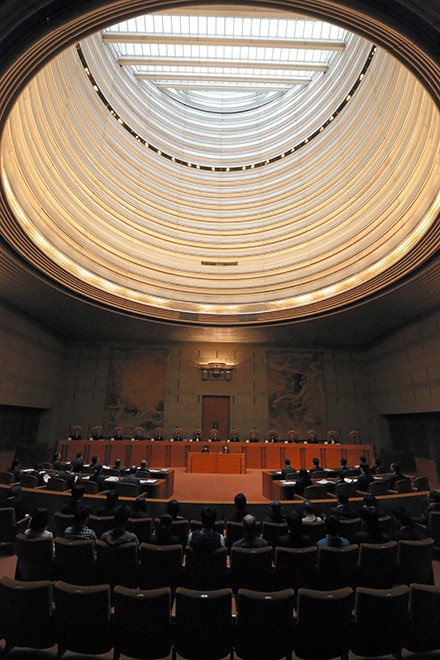 Ninety-two groups across Japan submitted a written request to the Supreme Court and other bodies to ensure that women account for at least one-third of all justices on the top court.

The Supreme Court comprises 15 justices, including the chief justice.

The most female justices to sit at one time was three. Now, there are only two.

Calls have grown for a more balanced gender composition in the Supreme Court, whose decisions can affect family and social systems.

Four justices--three men and one woman—will reach the retirement age of 70 this summer.
Candidates for justices are picked from among court judges, lawyers and others. The Cabinet makes the appointments after taking into account the view of the chief justice.

OP CEDAW Action, a civil advocacy group, sees the four openings as an opportunity to increase female representation on the Supreme Court.

In early March, the group petitioned bodies that have a say in the candidate selection process, including the Supreme Court, the Japan Federation of Bar Associations and the Cabinet Secretariat. It called for replacing the outgoing justices with women so that females will account for one-third of the justices.

The coalition, which is calling on the government to ratify the Optional Protocol to the Convention on the Elimination of All Forms of Discrimination against Women (OP CEDAW), consists of 56 groups. An additional 36 groups put their names on the written request.

In 2015, the Supreme Court rejected plaintiffs’ request for married couples to have the option of using separate surnames. The decision, however, was accompanied by “separate opinions” of five justices, including all three female members. They said Article 750 of the Civil Law, which states that a married couple should have the same surname, is unconstitutional.

“Ninety-six percent of married couples are adopting the surname of the husband,” Asakura has said. “That means more wives are suffering the pain of having their surnames changed.”

Asakura, a professor emerita of labor law with Waseda University, pointed out, “There are still other areas of society where men and women go through different experiences, so it is important to ensure a balance of men and women in the corps of justices of the Supreme Court, the highest decision-making body in our judiciary system.”

The Fifth Basic Plan for Gender Equality, which spells out the government’s efforts to be undertaken over five years from fiscal 2021 for the first time included a statement saying, “The share of women in court judges, including Supreme Court justices, should be increased.”

“A majority of cases that go to the Supreme Court are processed by a petty bench of five justices, which had only one female member even when there were three female justices overall,” said Michiyoshi Kiuchi, a lawyer who served as a Supreme Court justice when three women sat on the top court.

“It’s probably not easy to be the only woman on a bench,” he said. “Having two women on the bench could facilitate franker discussions.”

Kiuchi, however, pointed out a different side to the issue.

“The job of a court judge is about making decisions on things that you have never experienced on your own on the basis of what available materials you have,” he said. “You are not supposed to make those decisions on the basis of who you are or what you have experienced personally, so I think it is difficult to argue for a ‘need’ for more women to be appointed (to the Supreme Court).”

A senior official with the Supreme Court noted that the court itself does not pick its justices.

“The power to appoint justices lies with the Cabinet, so the Supreme Court only has limited discretion over the matter,” the official said.

“That means that for more women to sit on the Supreme Court, there should be more women in senior positions, such as president of a high court and head of a high public prosecutors office, so they can qualify as candidates,” the senior official said. “The problem is not so much about the Supreme Court alone as it is about the overall balance.”

(This article was written by Sawa Okabayashi, Satoko Tanaka and Shunsuke Abe.)