EDITORIAL: Decade after disaster, resilient Fukushima on path of rebirth 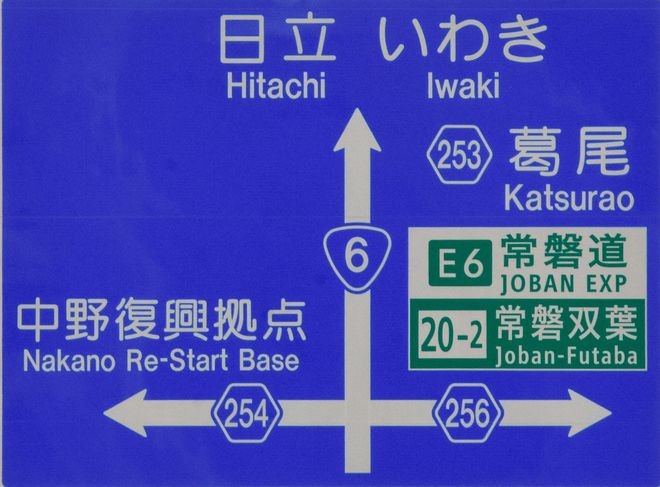 The word “Re-Start” is seen on a traffic sign that points the way to a reconstruction base in the town of Futaba, Fukushima Prefecture, on Jan. 23. (Taro Kotegawa)

The English word “Re-Start” is seen on a traffic sign that points the way to a reconstruction base in Futaba, Fukushima Prefecture, which co-hosts the crippled Fukushima No. 1 nuclear power plant.

Local businesses and other entities are expected to set up operations at the base.

Ten years ago on March 11, the Great East Japan Earthquake and tsunami triggered meltdowns at the power station, obliging Futaba to be entirely evacuated. None of its 6,000 or so residents has yet been allowed to return to their hometowns.

The word “restart” for the sign was chosen over “reconstruction,” which would have been a more precise translation of the original Japanese, to express their hopes that the base will serve as the point of departure for a fresh start.

People affected by the nuclear disaster are living through an entire variety of circumstances now. Figures of the Fukushima prefectural government show that 36,000 of them still remain evacuated.

Some of them still hope to return, while others have settled down elsewhere and have given up on a homecoming. But they all share an affection for Fukushima Prefecture.

We should embrace and support the inner thoughts of every one of them so they can celebrate the restart of their beloved regional community.

WITH DOSIMETER IN POCKET

Fukushima Prefecture continues to face a number of challenges, including the long-lasting decommissioning process at the crippled nuclear plant and preparedness against presumed aftershocks of the Great East Japan Earthquake that have yet to come.

The village of Iitate is the northwesternmost of the 11 municipalities in Fukushima Prefecture that were covered by evacuation orders of the central government.

The orders were lifted four years ago in most parts of Iitate, which, however, is now home to only less than one-fourth of its pre-disaster population of 6,500. And many of them are elderly citizens who have long resided in the village.

So is the case with Nobuyoshi Ito, 77, who carries a dosimeter in his pocket everywhere to measure his daily radiation exposure dose readings, which he posts on Twitter.

The radiation levels at his home do not raise any particular concerns, but the readings in mountains and forests, where Ito’s favorite edible wild plants grow, can be as high as 10 times the indoor levels.

All decontamination projects in Fukushima Prefecture ended three years ago. The cleanup work has certainly reduced radiation to stable low levels in areas where people typically live and spend time, but some other areas have been left untouched.

“I have grown older and that’s all there is to it,” said farmer Kanichiro Munakata in recalling the past decade. Munakata, 70, a resident of Tamura in the middle of the Abukuma Mountains in the prefecture, grows shiitake mushrooms on tree logs.

Fukushima Prefecture was one of Japan’s major shiitake production areas, but the nuclear disaster dealt a heavy blow to shiitake farming there because mushrooms are prone to absorb radioactive substances.

Munakata has only been able, after the disaster, to grow shiitake on a trial basis. He is hoping to get restarted in following a procedure that the prefectural government is expected to present in summer at the earliest, but the future still remains uncertain for him.

‘PEOPLE ARE RELIEVED BY POWER OF PEOPLE’

Electronic parts and medical devices have driven a growth in the manufacturing industry across Fukushima Prefecture, where the shipment value of manufacturing products has exceeded its pre-disaster levels. By contrast, farming, forestry and fisheries in the prefecture continue to face an uphill struggle.

Given the serious aging of workers and a serious lack of successors in those primary industries, no breakthrough is likely to be made simply by calling for assistance from the central government and damages from Tokyo Electric Power Co. (TEPCO), which operates the crippled nuclear plant.

Yoshiaki Konno, 20, who was born and raised in Minami-Soma in the prefecture, has taken a one-year leave of absence, starting last autumn, from Tohoku University, where he studies, to work as an intern for Asubito Fukushima, a general incorporated association based in his hometown.

Asubito, whose name roughly translates as “tomorrow’s people,” operates, among other things, hands-on courses on green energy for an audience of elementary and junior high school students. Konno is helping with the operation of similar activities.

Konno went to study in the United States in the summer of his second year in senior high school and felt motivated by his American contemporaries, who appeared so conscious of social challenges. That led Konno to ask for an opportunity to work for Asubito once he was back in Japan.

“I wish to find out a ‘core’ of my own while interacting with people who are working to revitalize Fukushima Prefecture,” Konno said.

A former TEPCO executive officer who hails from Minami-Soma set up Asubito’s predecessor in 2012 out of his desire to atone for the nuclear disaster, which occurred in the year after he retired from the position, and to help rebuild Fukushima Prefecture.

Asubito’s activities are resonating so broadly that they have spawned autonomous offspring groups of senior high school students and of university students.

The People, a nonprofit organization based in Iwaki, was set up in 1990 by a group of several female homemakers. It started out as a movement for recycling used clothing.

The group opened, and operated, a volunteer workers’ center in the immediate aftermath of the 2011 disaster. It has since been providing assistance to disaster survivors.

The People started what it calls the Fukushima Organic Cotton Project in the year after the disaster out of a desire to help farmers to the extent it can. A university provided seeds of a native cotton breed to the group, which teamed with a company that has know-how in organic cotton production.

The People practices organic farming to grow and process cotton, which it sells in the form of dolls and other products. The activity has so far involved local farmers, other local residents and evacuees to Iwaki alike.

“People are relieved by the power of people,” said Emiko Yoshida, chief director of the group.

The People was so named more than three decades ago out of a conviction that a lively community should have citizens who actively assert themselves and take action. Yoshida said she is feeling that its founding spirit is finally bearing itself out.

The central government is pushing large-scale projects in Fukushima Prefecture under the call for new flagship industries to replace nuclear power. A notable example is the Fukushima Innovation Coast Framework, which aims at building new industrial bases across a variety of domains, including everything from nuclear plant decommissioning to robots and drones.

Similar projects must certainly be necessary for creating jobs. We should not, however, forget about a need to provide assistance to autonomous efforts by Fukushima Prefecture’s residents who are working to rise up on a level that is more rooted in everyday life.

“I hope to make headway, step by step, toward the goal of community development that is tailored to the characteristics of our regional community,” said Yauemon Sato, 69, the chairman of Aizu Electric Power Co.

The Kitakata-based provider of photovoltaic power was founded in 2013 through funding from businesses, individuals and local governments within Fukushima Prefecture.

Sato, the ninth-generation proprietor of a sake brewery, decided to venture into the management of the power company out of an enthusiasm to ensure that regionally available energy sources are consumed locally.

Aizu Electric now has a fleet of 90 or so power generation bases, whose combined output is enough to cover the needs of 1,800 households. The company also has a plan to help build a wind farm in the village of Kawauchi, which was hit hard by the nuclear disaster.

Sato’s pledge could be taken as a message to the rest of Japan at a time when Fukushima Prefecture, which remained a supplier of food and energy to the rest of the country over much of the postwar period, is celebrating a restart for its own sake.