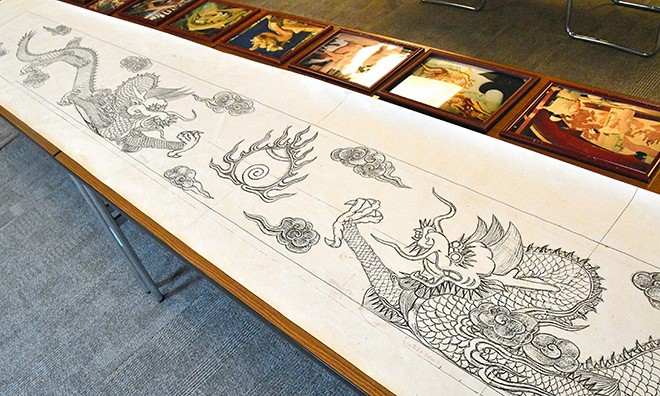 A sketch of a sculpture that decorated Shuri-jo castle's main hall, which was destroyed in a 2019 fire, found in Kanazawa in February (Rina Horikoshi)

KANAZAWA--The re-creation of a sculpture of two dragons lost in the 2019 blaze that destroyed Shuri-jo castle's Seiden main hall has been boosted with the discovery here of a sketch detailing their creation.

The 60-centimeter by 4.5-meter sketch was used to re-create the sculpture as part of the rebuilding of the castle located in Naha, Okinawa Prefecture, in 1992, which had been destroyed in the 1945 Battle of Okinawa.

The sketch outlines how the sculpture featuring two dragons facing each other and a treasure jewel called “hoju” was made. The sculpture was used to decorate a wooden portion set up behind a throne in the main hall.

Sadao Nishimura, 78, a professor emeritus at the University of the Ryukyus, said the sketch “is a valuable document to reconstruct” the castle, which burnt down in October 2019, after having undergone years of restoration work.

The sketch was found at the home of sculptor Hideo Ima, who died in 2014, in Kanazawa, Ishikawa Prefecture's capital.

Nishimura said he and Ima drew the sketch based on prewar pictures and other documents.

Ima’s wife, Yoshiko, 74, found it in late February while cleaning the couple's home.

She hopes the sketch's discovery will aid in rebuilding the castle.

Because of the sculpture, the castle had been a remembrance of her husband for her, Yoshiko said, and she was saddened by the 2019 fire.