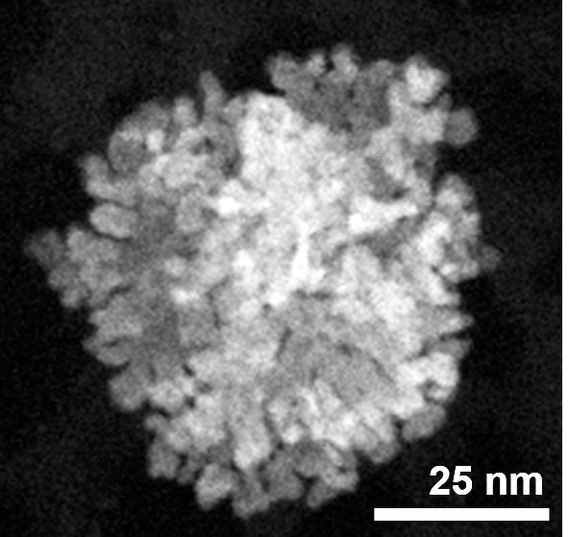 The alloy catalyst of ruthenium and iridium, which measures 60 nanometers wide (one nanometer is one-millionth of a millimeter), looks like coral in a microscopic image. (Provided by Kyoto University)

KYOTO--Researchers have developed a cheaper and more efficient way to produce hydrogen from water, an achievement that could lead to clean-fuel production becoming more sustainable.

Scientists from Kyoto University and other institutions have already started talks with a company to put it into practical use.

“We will proceed with research to create another catalyst that performs similarly by taking advantage of ingredients commonly available in large amounts, such as metals that are recycled in Japan,” said Kohei Kusada, an associate professor of chemistry at Kyoto University, who is working on the project.

Hydrogen has drawn a lot of interest among researchers as a prospective clean energy source to solve the world's woes over fossil fuels because using it does not produce carbon dioxide (CO2) emissions.

But the gas is typically made using methods that discharge CO2, through heating natural gas, petroleum and other fossil fuels.

Kusada and his colleagues have been studying a technique called water electrolysis that uses electricity derived from renewable energy to produce hydrogen.

It works like this: Scientists apply a certain level of voltage to water to produce hydrogen and oxygen. They coat electrodes with precious metals that serve as catalysts to promote the chemical reactions that split water into its component elements.

Researchers are particularly focused right now on catalysts that use platinum and iridium oxide to create hydrogen and oxygen, respectively, since those materials are commercially available.

But the new metal catalyst developed by this team of researchers uses an alloy made of ruthenium and iridium, so that both hydrogen and oxygen can be generated at the same time through accelerating chemical reactions.

The alloy comprises of microscopic crystal sheets measuring just 3 nanometers thick. One nanometer is one-millionth of a millimeter.

Because it is so dense, the crystalline structure can be seen on its surface, giving it an appearance similar to coral.

The team’s results suggest it is much more efficient than other conventional methods that use the same voltage. Due to its high reaction rate, this method can produce around 30 times the amount of hydrogen, the researchers said.

It is far more durable as well. The alloy can be used 10 times longer than the off-the-shelf iridium oxide catalyst now typically used in the industry, they said.

But precious metals are expensive, and their prices can be volatile. Iridium typically comes with a hefty price tag, often more than double that of platinum per unit of weight.

The team’s findings have been published in the British scientific journal Nature Communications at (https://www.nature.com/articles/s41467-021-20956-4).