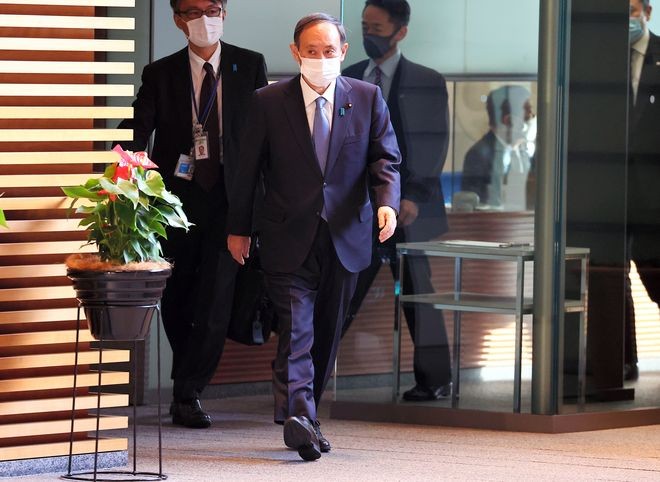 Upon his arrival, he usually takes a walk around the premises in a business suit. Meetings with his staff begin before 8 a.m.

I went back 40 years to check Suga's daily movements against those of his predecessors and confirmed him to be the earliest bird of the lot.

When on earth does he sleep?

A colleague of mine on the prime minister's office beat pointed out that Suga's lunch breaks are also very short--just five to 10 minutes, and he's back at work.

It has been six months since Suga became prime minister.

Obviously, he is an outstandingly hardworking person. But where his verbal communication skills are concerned, I must say he falls woefully short.

When answering questions in the Diet or at news conferences, he sometimes appears visibly uncomfortable. His face is practically expressionless, and he hardly ever speaks forcefully.

It is worrying that he instills no confidence as the leader of our nation in these difficult times.

British Prime Minister Harold Wilson (1916-1995), who led the nation during the Cold War, famously said: "The main essentials of a successful prime minister are sleep and a sense of history."

In short, the prime minister needs to get quality sleep to stay alert, speak clearly and deepen his understanding of history, according to "Seiji no Hin-i" (Political dignity) by political scientist Mitsuru Uchida (1930-2007).

Over the past six months, Suga has repeatedly used the word "sokowa," which may translate as "there."

For instance, he has said, "Sokowa kiwamete omoi" (literally, It's extremely important there); "Sokowa tekisetsu ni taio simasu" (I will deal with it appropriately there); and "Sokowa kensho suru hitsuyo ga aru" (It needs to be examined there.)

This manner of speech is clearly "short-ranged," so to speak. Rather than this being Suga's speech habit, I suspect it reveals his lack of long-range perspective.

For dealing steadily with each immediate issue, Suga is called a "practical prime minister." But sometimes, I wish he would speak his own philosophy clearly and from a broader perspective.