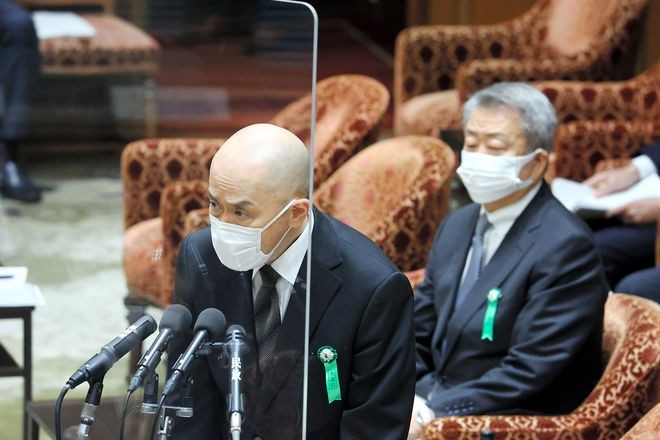 It is imperative to clarify the facts and hold people involved responsible.

It has been confirmed that Tohokushinsha Film Corp., the media company at the center of the wining and dining sandal that has rocked the ministry, has also violated a rule in the Broadcast Law that restricts foreign ownership of a broadcasting company.

The ministry has decided to strip a Tohokushinsha subsidiary in the satellite broadcast business of its license because of the violation.

Both the company and the ministry regulating the industry have shown surprising disregard for the importance of compliance with the law.

Since broadcasting uses the public’s airwaves, the law limits a foreign stake in a broadcasting company to less than 20 percent. The broadcast industry is keenly aware of this restriction.

When it applied to the ministry for a license to start ultra-high definition 4K resolution satellite broadcasting in October 2016, however, Tohokushinsha claimed it met all the legal requirements to engage in the business despite the fact that foreign investors held more than a 20 percent stake in the company.

The ministry accepted the claim without question and granted the firm the requested license.

Information about a company’s ownership structure can be easily found in its financial statements and other published documents. In fact, the violation was first pointed out by an opposition party lawmaker at the Diet through using published information.

The ministry neglected to check even such basic information. Obviously, the ministry completely lacks the competency to act as a regulator.

But that is not all.

Tohokushinsha says it became aware of its possible violation of the foreign ownership restriction in August 2017.

Testifying at an Upper House Budget Committee session as an unsworn witness on March 15, Tohokushinsha President Shinya Nakajima said an employee reported the fact to the ministry, disclosing the names of the employee and the ministry official who discussed the matter as well as the date of their meeting.

But the ministry says the official named does not recall holding such a meeting with a Tohokushinsha employee, adding no document or memo about such a meeting has been found.

The way all this is unfolding looks like a replay of the political scandals involving Moritomo Gakuen and the Kake Educational Institution--two school operators linked directly or indirectly to former Prime Minister Shinzo Abe.

The public deserves to know the entire truth. If the ministry decided not to take the action it had to take while recognizing the potential violation of the law, the reason for the decision must be clearly explained.

Also speaking as an unsworn witness, Jun Sawada, president of Nippon Telegraph and Telephone Corp., apologized for the company’s failure to understand the implications of wining and dining officials at the ministry but stressed that the purpose of these sessions was general discussions on various topics.

But the ministry has the power to issue permits and licenses for NTT’s various businesses. Recently, the ministry has been involved in NTT’s moves to cut fees on its mobile services and to turn NTT Docomo Inc., Japan’s largest mobile carrier, into a wholly owned subsidiary through a takeover.

The fact that many senior officials were repeatedly treated to pricy eating and drinking sessions by a company regulated and supervised by the ministry inevitably casts doubt about the fairness of the ministry’s policy decisions and actions.

It is also unclear whether and how NTT has entertained politicians including those holding politically appointed posts at the ministry--present and past ministers, parliamentary secretaries and senior vice ministers.

Telecommunications minister Ryota Takeda, who should spearhead the efforts to uncover facts, has been waffling over the matter, raising questions about his ability to tackle this serious problem.

How to respond to deepening public distrust of administrative and political integrity has emerged as the most important challenge for the Suga administration.