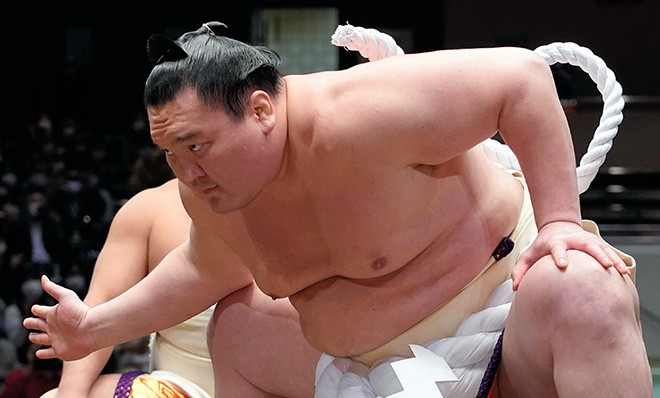 Yokozuna Hakuho pulled out of the Spring Grand Sumo Tournament on March 16 with a serious knee injury that will require surgery, after winning his first two bouts.

Stablemaster Miyagino reported that Hakuho's doctor said the wrestler requires surgery on the joint in his injured right knee, a procedure that will be done during the tournament. Hakuho will require about two months of rehabilitation after the operation.

“If Hakuho continued fighting in this condition, he could no longer do sumo,” Miyagino quoted the doctor as saying.

Hakuho has constantly suffered from fluid buildup in his right knee before the tournament began on March 14. He had fluid equivalent to three to four syringes drained on the night of March 15.

The withdrawal marked the fifth consecutive tournament that Hakuho has withdrawn from or missed entirely dating back to last year's spring tournament in Osaka, which he won.

Following his wins on the opening days of the 15-day tournament, which is being contested in Tokyo, the 36-year-old Mongolian did not grant interviews with reporters afterward.

Japan Sumo Association Chairman Hakkaku had been critical of Hakuho's physical state even before he dropped out.

“His condition is a far cry from the time he was really good,” Hakkaku said. “His movement is not sharp.”

Hakuho was forced to skip the New Year Grand Sumo Tournament in January after he tested positive for the novel coronavirus just days before the tourney’s opening.

The current tournament was Hakuho's first back in the dohyo after the JSA’s yokozuna advisory body in November issued a stern warning against him and the other yokozuna, Kakuryu, over their frequent absences from competition.

Kakuryu stayed away from the March tournament from the beginning due to injuries.

Hakuho has won 44 grand sumo tournament championships, the most of any wrestler in the long history of the sport. He has acquired Japanese citizenship in preparation for becoming a stablemaster upon retirement.