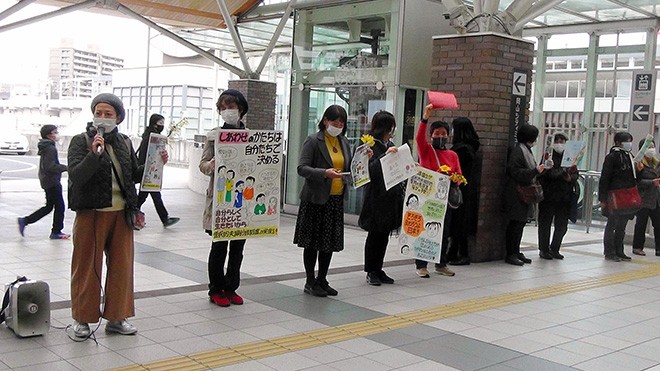 People in front of JR Okayama Station in Okayama on March 11 protest a proposed written opinion opposing dual surnames for married couples. The document is expected to be adopted by the Okayama prefectural assembly. (Miyuki Kanno)

The proposed written opinion, spearheaded by a group of prefectural assembly members of the Liberal Democratic Party, says a system that allows married couples to use separate surnames could undermine the bond and unity of the family.

It also argues that such a system would lead to parents and their children using different surnames, causing “irreversible” psychological damage to the children.

Lawsuits have been filed around the country to change legal stipulations that force married couples to use only one surname. Some political groups have supported the change, noting that women are almost always the ones who give up their family names.

The written opinion, however, warns that hastily changing the system could pose serious problems for the future of the country.

The document was compiled after a conservative political group submitted a petition opposing the dual surname system to the prefectural assembly, according to sources close to the assembly.

The petition was adopted at the assembly’s general affairs committee on March 16. The assembly is expected to adopt the written opinion at the plenary session on March 19.

Thirty-eight of the 55 prefectural assembly members belong to the LDP group.

At the national level, opinions are divided even among LDP Diet members over introducing a dual surname system for married couples. Lawmakers are engaged in heated debate over the issue as the central government plans to draw up a new strategy for gender equality.

“We understand that there are various opinions about the system,” said Gaku Amano, an Okayama prefectural assembly member who is also secretary-general of the LDP’s Okayama prefectural chapter. “We want the Diet to further discuss the matter (following the submission of the proposed written opinion).”

Nobuko Sumasu, another Okayama prefectural assembly member who belongs to the Japanese Communist Party, told reporters that a dual surname system would not harm those who prefer one surname for married couples because the change would simply allow couples to “choose” their surnames.

“If children who use different surnames from their parents cannot have the same access to welfare services as those who do not, that system itself is a problem,” Sumasu said. “The latest move (to adopt the written opinion) runs counter to growing calls for eliminating the gender gap. It’s unbelievable.”

Twenty-one prefectural assemblies nationwide adopted written opinions opposing the dual surname system for married couples in 2010, according to the National Association of Chairpersons of Prefectural Assemblies.

At the time, Justice Minister Keiko Chiba, under the administration of the Democratic Party of Japan, attempted to propose revisions to the law to let married couples use separate surnames.

The association said such local opposition to the dual surname system has been rare in recent years.

(This article was written by Takashi Yoshikawa and Miyuki Kanno.)