EDITORIAL: Quad framework needs to do more than just dealing with China issues 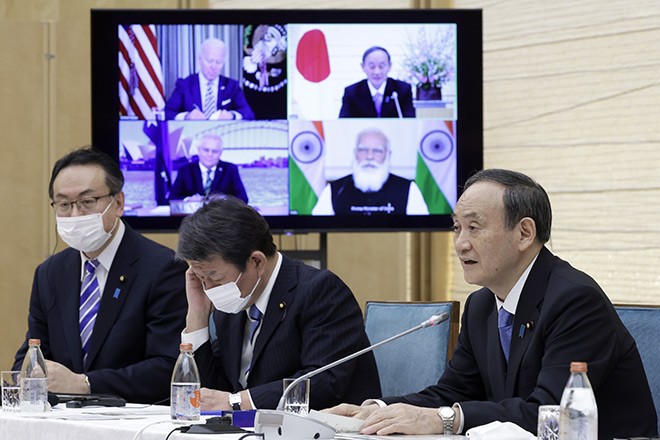 There is no doubt that the partners of the so-called Quad grouping--Japan, the United States, Australia and India--share concerns about China’s growing presence.

But their cooperation would be pointless if it aggravates regional tensions and invites divisiveness. The four countries must ensure that this framework will contribute to the stability of the international order.

In their first summit held online last week, the leaders of the four countries issued a joint statement, pledging to work closer to bring about a “free and open Indo-Pacific.”

The partners reaffirmed their cooperation on novel coronavirus vaccine supplies, climate change and maritime security. The leaders also confirmed that they would meet in person before the end of this year.

The Quad was proposed by Shinzo Abe during his first stint as prime minister. There followed some twists and turns because of the partners’ varied China policies and other issues. But in recent years, the level of talks has risen from those by bureau chiefs to foreign ministers.

The online meeting was called by U.S. President Joe Biden, who views China as “the most serious competitor.”

The summit marked the Biden administration’s first step in its China policy, to be followed by a meeting between the U.S. and Japanese foreign and defense ministers on March 16, a meeting of the U.S. and Chinese foreign policy chiefs this week, and Prime Minister Yoshihide Suga’s summit with Biden in Washington next month.

However, should the shift be seen as greater efforts to contain China and if China reacts in retaliation, the conflict will only escalate.

Some in China are leery of the Quad as a potential precursor of an “Indo-Pacific version of the North Atlantic Treaty Organization.” The partners need to make clear that this is a non-military framework.

In the first place, the four countries have different China policies of their own. India, in particular, has its “non-alliance” tradition and has been striving to establish a balance with China.

It was out of consideration for India’s position that the summit brought global issues to the forefront, such as efforts to boost COVID-19 vaccine supplies.

The Quad will defeat its own purpose if it comes out too strong against China and creates internal dissent as a result.

The group must maintain dialogue with Beijing and seek coexistence through cooperation while curbing China’s actions in defiance of the existing order, such as aggressive advances in the South China Sea and the East China Sea.

The joint statement called for a “free, open rules-based order, rooted in international law.” If the partners hope to get China on board, they must make constant diplomatic efforts.

The four countries are also being tested on how to maintain their cooperation based on their shared belief in values such as human rights and the rule of law.

For example, India continues to develop and possess nuclear weapons without joining the Nuclear Nonproliferation Treaty, and the international community remains critical of the country’s approach to human rights issues at home.

If every partner can contribute to the advancement of universal values without pretending that they don’t have problems of their own, the Quad will transcend its agenda of dealing with China and serve the greater purpose of supporting the international order.