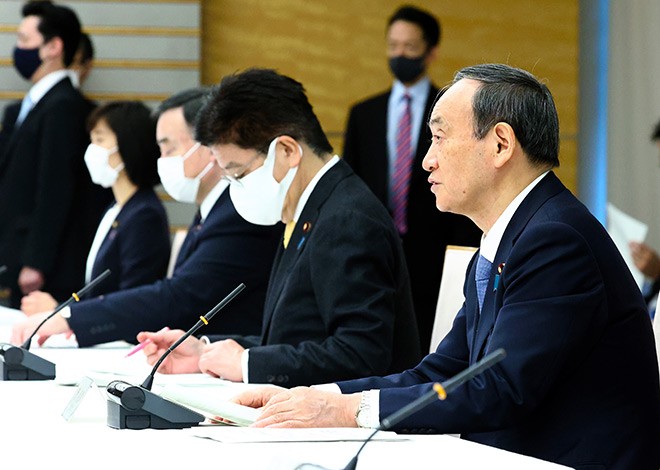 The central government announced it will provide cash handouts to families that are struggling financially amid the COVID-19 pandemic, including two-parent households, under a new program.

“The pandemic has dealt a heavy blow to the employment of women and nonregular workers,” Suga said at a meeting of relevant Cabinet ministers on March 16. “We also need to tackle the problems of a rise in suicides, as well as loneliness and social isolation, head on.”

The government will use more than 500 billion yen ($4.58 billion) in reserve funds from the budget for the current fiscal year to fund the new subsidy program. The money will also fund other support measures for nonregular workers and those who have poor job security.

This is the third time the government is providing cash payouts to struggling families amid the pandemic. But under the first and second cash-handout programs, only single-parent households were eligible to receive 50,000 yen for their first child and 30,000 yen for each subsequent child.

The new program will also cover two-parent households and households with children that are receiving the child care allowance or are exempt from residential taxes. The amount will be 50,000 yen per child, regardless of the number of children in each household.

The government plans to start providing cash handouts by the end of March at the earliest, after it sets requirements for the program and fleshes out other details.

The government will also extend the deadline for accepting applications for two types of interest-free special loans that do not require guarantors. It is pushing back the date by three months to the end of June.

One of the loans offers up to 200,000 yen to people who need money to cover living expenses. The other provides the same amount in loans per month for up to nine months to those who have lost their jobs.

The government also decided that households will not have to pay some or all of the loans back, depending on the period they are exempt from paying residential taxes.

The government made it clear that it is also accepting applications for those loans from part-time workers who have seen their incomes decline from their workplaces scaling back shifts, and single parents who are receiving fewer child-support payments from their divorced spouses.