Suga: State of emergency for Greater Tokyo to end on March 21 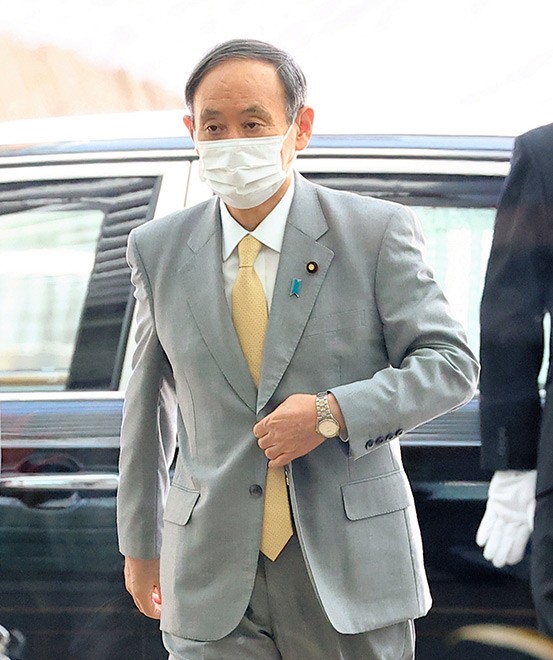 Prime Minister Yoshihide Suga arrives at his office on the morning of March 17. (Kotaro Ebara)

The state of emergency for Tokyo and three neighboring prefectures imposed over the COVID-19 pandemic will be lifted as scheduled on March 21, Prime Minister Yoshihide Suga said on March 17.

Suga discussed lifting the state of emergency with Norihisa Tamura, the health minister, and Yasutoshi Nishimura, the state minister in charge of economic revitalization who also heads the central government’s efforts in dealing with COVID-19, according to several government sources.

Suga stated his decision to lift the state of emergency during that meeting on March 17, which followed a session of the health ministry's panel of experts.

Suga said that a final decision will be made on March 18 after the meeting of an expert panel.

Tokyo and neighboring Kanagawa, Saitama and Chiba prefectures have been under a state of emergency since Jan. 8.

The central government had sought to bring down the level of COVID-19 infections spreading from the worst level, stage 4, meaning cases were explosively increasing, to at least the second-highest level, stage 3.

As of March 15, Tokyo and the three prefectures were at stage 3 or lower for five of the six benchmarks used to classify the stage infections are spreading at, according to figures compiled by the Cabinet Secretariat.

A major factor behind the government officials' decision to lift the state of emergency was that fewer COVID-19 patients are being hospitalized.

Suga, during the March 15 Upper House Budget Committee session, said that the figures for new COVID-19 cases had dropped to the equivalent of the stage 2 level.

However, the daily average over the course of a week rose slightly for Tokyo and Saitama compared to the previous week.

Despite some experts having urged caution about lifting the state of emergency, one Cabinet minister said, “If the state of emergency is not lifted now, there is no telling when that would be possible. We would have no measures to take if we did not lift it because cases increased from now.”

Tokyo Governor Yuriko Koike has not come out clearly on whether the state of emergency should be lifted, but Saitama Governor Motohiro Ono has raised doubts about lifting it.

Government officials, including Chief Cabinet Secretary Katsunobu Kato, however, have made clear that any decision on lifting it would cover all four prefectures simultaneously.

Because of concerns among experts and some government officials about a possible rebound in new COVID-19 cases, the central government plans to strengthen infection prevention measures, including securing an adequate number of hospital beds, conducting periodic tests at facilities for senior citizens, dealing with variant strains of the novel coronavirus and testing asymptomatic individuals visiting entertainment districts.