EDITORIAL: Ball is in the Diet’s court now to legalize same-sex marriages 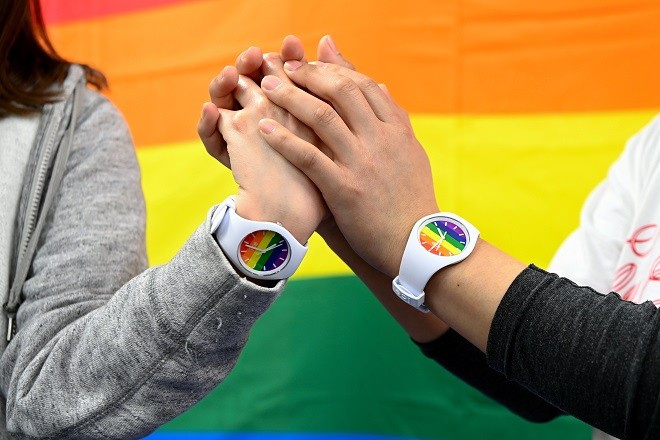 A couple of plaintiffs hold hands after the news conference on the verdict that ruled the government's refusal to recognize same-sex marriages is unconstitutional. (Kengo Hiyoshi)

The Sapporo District Court on March 17 ruled that the government’s refusal to recognize same-sex marriages and provide legal protection to gay couples is unconstitutional, arguing the policy constitutes “irrational discrimination.”

In a landmark ruling on a lawsuit filed by people seeking to have marriage between two men or two women recognized as legal, the court declared the nation’s policy violated the Constitution, which upholds the principle of equality under the law.

We welcome the court's decision, which promotes respect for the basic human rights of minorities and is in tune with the growing trend toward embracing diversity in society.

The system of marriage is designed to give an official endorsement to the relationship between two individuals joined together as spouses. A legally recognized marriage produces various legal effects on the couple, including both rights and obligations.

The policy of excluding same-sex marriages from this legal framework should no longer be tolerated. The Diet and the government should immediately start taking steps to rectify the inequality.

“Sexual orientation is not something that a person can choose and change at their own will,” Presiding Judge Tomoko Takebe said in the ruling, likening it to gender and race.

While acknowledging that the Diet has broad discretion to decide what kind of marriage system the nation should have, the judge concluded that there is no good reason for excluding gay couples from the system.

Pointing out, however, that this is a relatively new issue, the ruling rejected the plaintiffs’ demand for compensation for the Diet’s failure to revise the civil code and the family registration law to legalize same-sex marriages.

Trials on similar constitutionality cases concerning same-sex marriages are under way at four other district courts, including the Tokyo District Court.

As the ruling pointed out, the public’s views about marriage between two people of the same sex have changed significantly over time. There is no rationale for not reviewing the policy.

Some local governments have adopted more progressive polices to respect the rights of same-sex couples.

A partnership system that officially recognizes the relationship of same-sex couples, first adopted by Tokyo’s Shibuya Ward in 2015, has been introduced by nearly 80 local administrations, including the Osaka, Ibaraki and Gunma prefectural governments.

The trend is also spreading in the private sector, with a growing number of life insurance companies allowing same-sex couples to take out life insurance policies payable to their partners, for example.

Since the relationship of a same-sex couple is not legally recognized as marriage, however, they are not eligible for a wide range of taxation and other legal benefits granted to legally married couples even if they are recognized as partners.

Same-sex partners are also denied eligibility for the government’s program to provide financial support to the bereft families of crime victims. This rule has led to another legal dispute.

Foreign nationals who have gotten married with same-sex Japanese spouses are not eligible for a spousal visa when they come to Japan and remain in an unstable visa status. The American Chamber of Commerce in Japan and business organizations of some other countries have called for a change to this visa rule.

For same-sex couples, this is an issue that directly affects their lives and happiness.

Two years ago, three opposition parties jointly submitted a bill to the Diet to revise the civil code to legalize same-sex marriages. But the bill has only been gathering dust.

The legislature should take the ruling seriously as a warning from the judiciary about its inaction on all these problems and embark on debate on the issue during the current session to chart a path toward a better marriage system.

Refusing to step up to the plate now would be tantamount to supporting discrimination and prejudice.