JR not on board with preserving historic railway embankment 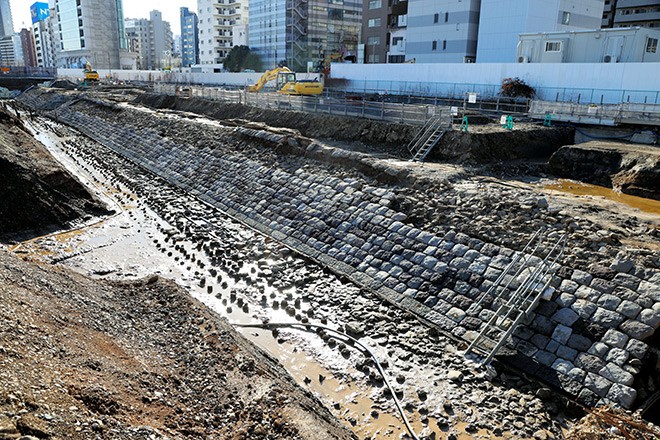 Archaeologists and government officials are climbing aboard an effort to preserve the remains of an embankment in central Tokyo built about 150 years ago for Japan’s first railway service.

However, East Japan Railway Co. (JR East) plans to relocate the Takanawa Embankment ruins or preserve only parts of the relic as the company proceeds with redevelopment of surrounding areas.

Archaeological researchers are demanding the entire embankment, which was constructed for trains to run on top above the sea, be retained where it stands given its historical importance.

The Japanese Archaeological Association in January submitted a request calling on JR East and the Agency for Cultural Affairs to reconsider development plans.

A statement was issued on March 2 in the name of Hideto Tsuji, the association’s president, to urge JR East to fundamentally review its project and maintain the entire embankment.

It describes the Takanawa Embankment ruins as “exceptional in the world” and argues that the railway operator “has the responsibility to preserve all the remaining sections as a relic of East Asia’s first railway.”

In the statement, Tsuji emphasizes, “JR East should recognize the significance of the remnants of the place where the company was born.”

JR East plans to build a skyscraper to accommodate offices and other facilities in the redevelopment area around JR Takanawa Gateway Station in Tokyo’s Minato Ward by fiscal 2024 at a cost of approximately 500 billion yen ($4.58 billion).

As the unearthed sections run across the area, keeping them intact will raise the project cost. For that reason, the company remains opposed to drastically revising development plans.

“The redevelopment project will become totally impossible if the entire embankment has to be maintained,” Yuji Fukasawa, president of JR East, said at a March 3 news conference.

Seeing the disagreement between the two parties, the government is prodding JR East to find ways to preserve the remains where they stand.

Koichi Hagiuda, the education and culture minister, visited the Takanawa Embankment in February.

“I felt the remains are an exceptional cultural property representing Japan’s modernization during the Meiji Era (1868-1912),” Hagiuda told reporters at the time. “We want JR East to balance development and conservation and consider approaches to preserve and display the relic on site.”

Hagiuda reported the results of his inspection to Prime Minister Yoshihide Suga on March 11.

“Both I and the prime minister have reaffirmed the belief that the remains can maintain their value only when they are preserved at the current site,” Hagiuda told a regular news conference on March 16.

The cultural properties subcommittee of the Council for Cultural Affairs on March 23 recommended that the remains of the Takanawa Embankment be preserved on site because it is an extremely important relic on Japan’s modernization.

In a recommendation submitted to Ryohei Miyata, commissioner for cultural affairs, the subcommittee called on the central government, JR East, the metropolitan government and Minato Ward to work toward designating parts of the embankment as a national historical site.

It was believed that the embankment had been removed when the area was reclaimed in or after the late Meiji Era.

However, some of its stone walls were unearthed during improvement work on JR Shinagawa Station in April 2019. Other sections were excavated in July 2020 at the former site of a rail yard under development in front of Takanawa Gateway Station, which opened in March 2020.

(This article was written by Yuta Ichijo and Hikari Maruyama.)