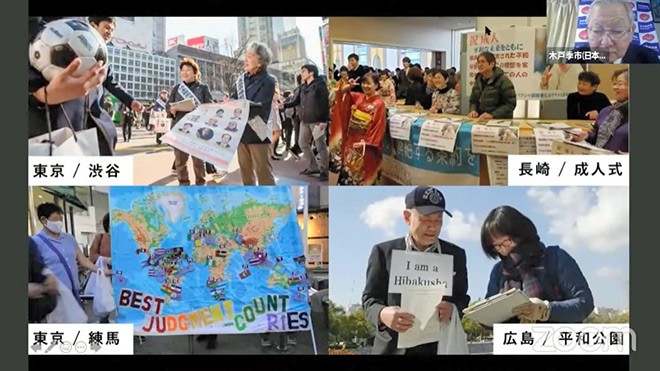 A group of mainly survivors of the 1945 atomic bombings of Hiroshima and Nagasaki was awarded the prestigious 2020 Sean MacBride Peace Prize for its petition campaign urging all nations to sign the U.N. treaty banning nuclear weapons.

More than 13 million people signed the petition during the campaign, which ran from April 2016 to December 2020.

The International Peace Bureau (IPB) awards the prize to individuals or organizations that have done outstanding work for peace, disarmament or human rights.

The Black Lives Matter movement, which protests racism and police brutality, was a co-recipient of the 2020 prize.

“The Treaty on the Prohibition of Nuclear Weapons went into effect, but we might need to try harder than ever to terminate nuclear weapons,” said Terumi Tanaka, co-chairperson of Nihon Hidankyo (Japan Confederation of A- and H-Bomb Sufferers Organizations), during his speech accepting the prize.

“We would like to pass the hibakusha movement and its passions down to the younger generation we campaigned with to create the petition,” he added.

The IPB selected the Appeal of the Hibakusha for the award last August for “being one of the largest signature campaigns ever carried out in the world and a powerful popular force manifesting global demands for the complete elimination of nuclear weapons.”