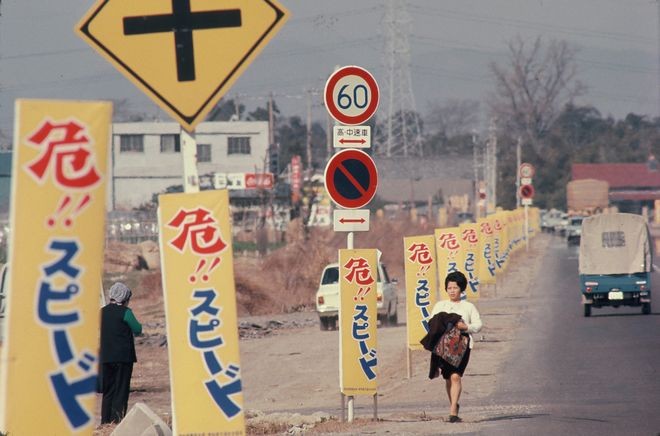 Signs along the roadside warn drivers not to speed in Ichinomiya, Aichi Prefecture, in 1969 during the "traffic war." (Asahi Shimbun file photo)

While riding in a taxi in Tokyo's Nerima Ward the other night, I kept seeing flashes of a glinting "face" along the roadside, reminding me of a Hannya (jealous female demon) Noh mask, with her penetrating eyes and lips curled up in a fierce sneer.

These eyes and mouths, cut out from yellow reflective tape, were glued to utility poles.

With the help of an old newspaper article, I tracked down the person who put them up--Shigeru Sekiguchi, 81, a retired police officer residing in Tokorozawa, Saitama Prefecture.

"That was 25 years ago," Sekiguchi recalled. "I thought they'd all peeled off by now."

The Nerima precinct of the Metropolitan Police Department, where he worked at the time, was handling more than 1,000 traffic accidents a year, and the cases requiring urgent attention were mostly occurring on back streets, rather than on the main drag.

Sekiguchi was tasked with finding countermeasures. But since the precinct had no budget, he turned to the Tokyo Metropolitan Bureau of Transportation and the Tokyo Trucking Association to borrow reflective tape.

With scissors, he cut the tape into eyes, noses and mouths and attached them to utility poles.

His strategy was to grab drivers' attention with the reflected flashes from car headlights.

His handiwork was sometimes mistaken for a prank by students or a warning for wayward dog walkers who don't pick up after their charges.

But Sekiguchi kept at it between shifts, tweaking the angles of the pieces to vary the intensity of the "scowl."

When his efforts were reported by a newspaper, similar undertakings were launched elsewhere in the nation, including Nagano, Shizuoka and Fukuoka prefectures.

In Japan's postwar history of traffic accidents, the worst era was when I was a primary school pupil. Amid what came to be dubbed the "traffic war" of half a century ago, about 16,000 people died every year.

Today, the fatalities are only about 20 percent of that peak level.

This owes to the introduction of stricter penalties against drunk driving and other legal remedies, but I am sure the hard work of beat cops must have helped, too.

While jogging the other night in Nerima Ward, I came across those "faces" one after another--some weeping, others laughing and yet others irate.

I mumbled my thanks to those "demons" who have worked 24/7 all these years to protect us from traffic accidents.