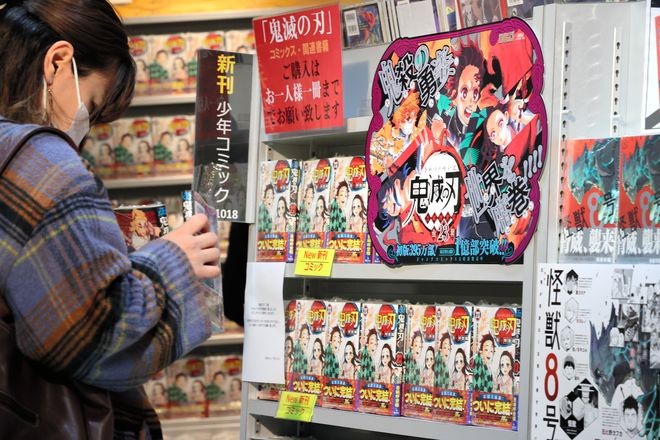 A fan buys the final volume of the comic “Demon Slayer: Kimetsu no Yaiba” at a bookstore in Tokyo’s Shibuya Ward on Dec. 4. (Asahi Shimbun file photo)

Combined sales of print and digital manga surged beyond 600 billion yen ($5.5 billion) in 2020 for the first time since records began in 1978, Shuppan Kagaku Kenkyujo (Research institute of publication science) said.

The 23-percent year-on-year increase to 612.6 billion yen surpassed the previous sales peak of 586.4 billion yen set in 1995, when Weekly Shonen Jump and other manga anthologies were at the pinnacle of their popularity, it said.

The institute attributed the growth to stay-at-home lifestyles during the COVID-19 pandemic and the huge success of “Demon Slayer: Kimetsu no Yaiba,” which also ran in Shonen Jump.

The digital comic market grew by 31.9 percent to 342 billion yen, up 82.7 billion yen from the previous year, and topped the 270.6 billion yen in combined sales of print comics and manga magazines.

Still, the print comic market turned upward for the first time in 19 years.

With its print volumes alone totaling about 30 billion yen in sales, the series greatly helped to expand the overall market size.

However, the print manga magazine market decreased to 62.7 billion yen in 2020, down 13.2 percent from the previous year.

During its peak year of 1995, the manga magazine market was worth 335.7 billion yen, accounting for about 60 percent of overall comic market valued at 586.4 billion yen.

“There has been a shift in sales from comic magazines to comic books, but there is a further shift toward digital comics at an increasing pace,” said Atsushi Mizuno, a researcher at Shuppan Kagaku Kenkyujo. “The custom of reading (manga) in the form of magazines is disappearing.”

But one problem with the digital market continues to annoy publishing organizations and other entities.

Stay-at-home lifestyles in 2020 also apparently contributed to a surge in access to piracy websites, which show manga and other content without permission.