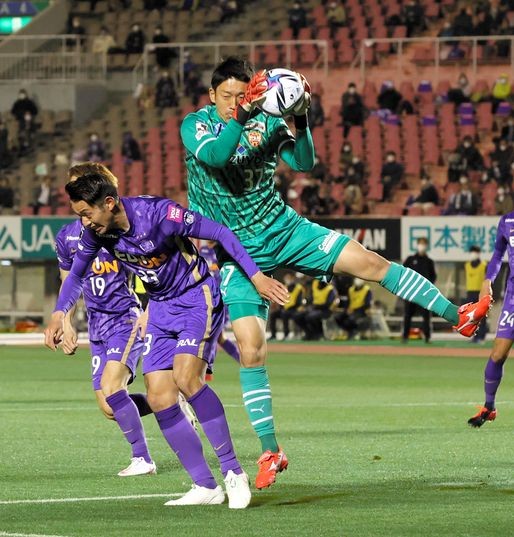 Shuichi Gonda, a goalkeeper of Shimizu S-Pulse, catches the ball during a game against Sanfrecce Hiroshima FC on March 17 at Edion Stadium Hiroshima in Hiroshima. (Jun Ueda)

A nine-minute video filled with cringeworthy scenes was made mandatory viewing for all J.League teams before the professional soccer league’s season opened in late February.

“You make sure to show it to everybody,” said a note attached to the video sent from league officials.

In one segment of the highlight video, a J.League player chasing the ball falls to the ground. Another player then stomps on the fallen player’s stomach.

In another scene away from the ball, a player gives a hard elbow to an opponent.

“I’m sure they hate even the sight of such plays, but we decided to make them see the video to make a point,” J.League Vice Chairman Hiromi Hara said.

Hara said the purpose of making and showing the video is to teach a lesson through negative example to get players and coaches to eradicate rough plays that result in yellow and red cards.

The video also encourages proper behavior by showing embarrassing scenes of players and managers screaming and whining at referees.

In one scene, a manager rants and raves about a referee’s call and throws a plastic bottle at the ground. “Where are you looking at, ref?” the manager yells. “How in the world was that not a foul?”

J.League officials said the novel coronavirus pandemic has pushed them to promote better behavior among players and coaches.

With restrictions on the number of spectators in stadiums, more fans have been watching soccer games on DAZN, a live sports streaming service that allows them to replay malicious plays as many times as they like.

In stadiums, spectators are urged not to cheer loudly to prevent the spread of possibly contaminated droplets. In the relatively silent stadiums, the voices of players and managers can be heard loud and clear by fans in the stands.

League officials said they have received complaints from spectators, such as, “I don’t want to hear their foul-mouthed rants.”

“Playing hard and playing dirty are two different things. And objecting (to a referee’s call) and verbal abuse are different, too,” Hara said. “We have taken a step to upgrade the J.League as a whole.”

A veteran player offers some advice on how to better communicate with referees.

Shuichi Gonda, a goalkeeper who joined the Shimizu S-Pulse this season, said part of his pre-match routine is to check the names and ages of all referees of the game.

Gonda said he saw players in Portuguese Primeira Liga, where he played until last season, calling referees by their names rather than addressing them “referee.”

“Just by calling referees by their names and with ‘sir’ or ‘Mr.,’ you can change the impression,” Gonda said. “Refs are human. That surely changes their perception.”

He said the approach is important and helpful because players need to communicate well with the referees. He has seen many players become obsessed with arguing against a referee, losing their cool and committing a foul.

Hiroshi Jofuku, manager of Sanfrecce Hiroshima FC, said he has taken a new attitude toward referees this season.

In the last home game of the previous season in December, Jofuku was ejected after twice arguing against the referee’s call.

“Fighting against a referee has no benefit for the team,” Jofuku said, reflecting on the narrow loss.

The league formally decided to use the Video Assistant Referee (VAR) system this season to help determine the right calls on the pitch.

“It is fair to judge a close play by watching a video replay,” Jofuku said. “I am comfortable now.”