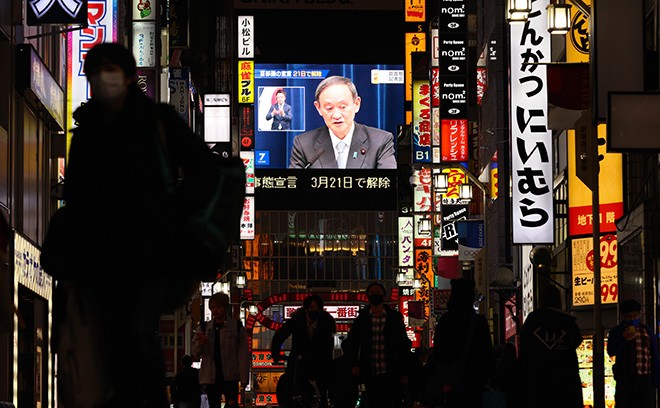 A video display in Tokyo’s Kabukicho entertainment district on March 18 shows Prime Minister Yoshihide Suga explaining his plan to lift the state of emergency for the capital and three neighboring prefectures. (Tatsuya Shimada)

Tokyo ordered 27 bars and restaurants to shorten their operating hours, the first such move in Japan under legal revisions targeting businesses that refuse to cooperate under the COVID-19 state of emergency.

The order was issued on March 18 based on Article 45 of the revised special measures law that took effect in February to deal with the novel coronavirus pandemic.

The law contains penalties against business operators that do not comply with requests to close early during a state of emergency. If they refuse to follow the order, they could face administrative fines of up to 300,000 yen ($2,750).

“We wanted to avoid giving business operators the impression that they can keep operating longer than requested,” a metropolitan government official said. “More businesses may defy the request if we do not issue an order.”

The Tokyo metropolitan government asked bars, restaurants and karaoke parlors to close by 8 p.m. based on Article 24 of the special measures law after the central government issued a state of emergency for the capital and three neighboring prefectures in January.

In a subsequent investigation, the metropolitan government found that 129 outlets were not cooperating with the request.

It again asked them to close early based on Article 45 of the special measures law. It also warned those businesses that it would order them to shorten their operating hours on March 15 or later if they failed to comply with the second request.

The special measures law allows prefectural authorities to publish the names of establishments that are ordered to close early.

But the metropolitan government decided not to disclose the names of the 27 bars and restaurants because doing so could draw crowds to those places and raise the risk of infections.

The metropolitan government will dispatch officials to the targeted establishments to check if they are following the order until March 21, when the state of emergency will be lifted.

The metropolitan government will notify a court of any noncompliance found in its on-site investigations.

Tokyo may issue additional early closure orders to other outlets before March 21, an official said.