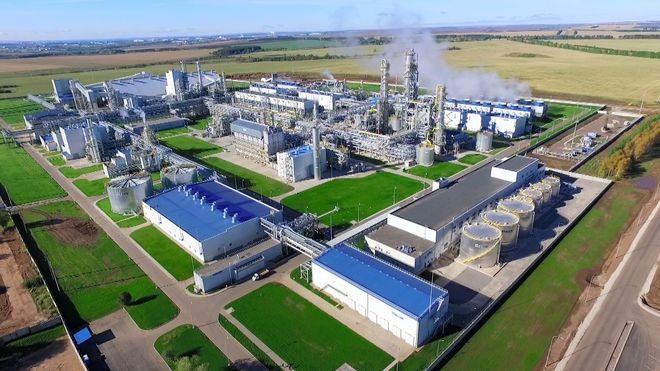 An artist's concept of an ammonia plant (Provided by Mitsubishi Heavy Industries Ltd.)

The government, in a major shift, is prioritizing using ammonia to create clean energy to meet its goal of lowering Japan's greenhouse gas emissions to net zero by 2050.

“As of now, ammonia is more suitable for practical use for fuel than hydrogen,” an economy ministry official said.

Though hydrogen has been attracting a lot of attention as an energy source for a while, Japan has only recently become interested in using ammonia at power plants.

Ammonia emits no carbon dioxide (CO2) when it is burned, which has led to expectations that it could rewrite Japan's energy strategy by replacing coal, notorious for its heavy CO2 emissions.

“Carbon neutral thermal power using ammonia is a game changer in the industry,” said Takeo Kikkawa, a professor at International University of Japan, who specializes in energy policies.

“If we were able to put it into practical application, we might not need nuclear power in the future.”

The fuel ammonia industry was chosen as one of the prioritized areas in the “green growth strategy” action plan announced by the Ministry of Economy, Trade and Industry at the end of 2020.

Japan aims to establish the technology to burn fuel mixed with ammonia at coal-fired thermal power plants by 2023. It hopes to put a fuel with an ammonia content of 20 percent on a calorie basis into practical application in 2025 or later.

By 2040 or later, it hopes to realize the technology for 100 percent ammonia-fired thermal power generation.

It is hoped that ammonia-fired thermal power will be able to supplement renewable energies that lack stability in power generation.

Though hydrogen also emits no CO2 when burned, ammonia has the advantage of being easier to handle.

The costs of facilities related to ammonia, such as storage tanks, are cheaper than for hydrogen, and ammonia is also easier to transport.

The biggest obstacle for using ammonia as an energy source, however, may be that Japan lacks enough ammonia.

Japan's domestic ammonia consumption was about 1.08 million tons in 2019. About 20 million tons of ammonia, equivalent to the annual amount of ammonia traded globally, would be required to achieve the plan for using 20 percent ammonia in coal-fired fuel.

To boost supply, a council comprised of the economy ministry and private sector businesses such as companies that build ammonia plants, compiled a report on Feb. 8 that the government aims to establish domestic supply chains for 3 million tons of ammonia in 2030 and 30 million tons in 2050.

Hydrogen is necessary to synthesize ammonia, so it needs to be taken out from natural gases or obtained by breaking down water with electricity generated by renewables.

The council drew up a scenario where ammonia production plants would be built in places suitable for such processes, such as North America and Australia, and supply chains for Japan would be established.

The government will also try to reduce costs by increasing the distribution amount of ammonia and advancing innovations in how it is manufactured and transported.

It estimated that ammonia-fired power generation per kilowatt hour costs 12.9 yen (12 cents) with a mixture of 20 percent ammonia and 23.5 yen using ammonia alone.

That's far cheaper than hydrogen, which incurs huge costs to transport. But it is still more expensive than coal-fired thermal power, which costs only 10.4 yen.

Initially, the government was contemplating using ammonia in a totally different way.

Between fiscal 2014 and fiscal 2018, the Cabinet Office was proceeding with a research and development project that was trying to change hydrogen temporarily into ammonia and transport it.

Figuring out how to do so, it hoped, would make it possible to transfer a great amount of hydrogen cheaply from production areas abroad to Japan.

But during the process, the research team realized that it might be better to burn ammonia itself at power generation facilities.

“We studied using ammonia as fuel at the same time and found out that it can be burned at power plants," recalled Shigeru Muraki, the program director of the project at the time and a former vice chairman of Tokyo Gas Co.

One obstacle for doing so was that toxic nitrogen oxides (NOx) are emitted when ammonia is burned, but technical innovations enabled the amount of emissions to be lowered to below environmental standards.

However, the idea of using ammonia as fuel did not draw much attention as use of hydrogen became the main issue.

Economy ministry officials in charge of Japan's fossil fuel policies, such as liquefied natural gas, put a new spotlight on the use of ammonia last year, according to people associated with fuel materials.

With the energy supply situation in the Middle East becoming unstable, the government listed fuel ammonia as one of its measures against global warming for the first time in March 2020 as a part of a new international material strategy compiled by the department.

At the end of last year, the government revealed a plan for 2050 that indicated that power generation fired by hydrogen and ammonia would account for about 10 percent of Japan's total energy production.